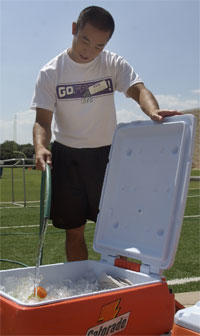 The athletic trainers at TCU give up Thanksgiving Break, Christmas at home, road trips with friends and eight consecutive hours of sleep.In return, they get out-of-state vacations, a sideline view and 29 “brothers and sisters.””I have an experience I’m not sure most other college students get,” said Aron Low, a senior athletic training major.Low is one of 30 student trainers who will graduate with a Bachelor of Science degree in athletic training. “It’s a very good feeling to know I’m part of something good,” Low said.Some students in the program say they don’t see themselves as being all that different from the students who pull all-nighters to complete homework or study for exams – only the trainers do it almost every day. “I get up at 6 a.m. to exercise, I start class at 8 a.m., and on a good day, I’m out of the training room by 7:45 p.m.,” Low said.Another senior athletic training major, Heidi Marsh, said time management is one of the key elements of coping with the long hours. She said at times things can get pretty tight, but she works best under pressure.Making the best use of time seems to be a common concern among students, especially athletic trainers.”Athletic training is a seven-day-a-week job, but by time managing, I can cope with the responsibilities I have as a student and as a trainer,” Low said. “I think that by doing this I have a certain degree of maturity toward life beyond that of any other college student.”Trainers say the program isn’t just about having long hours and coping with them, but it is also about the players.Ryuji Mita, a 32-year-old orthopedic therapist from Japan, came to TCU to be in the athletics training program not only because his boss recommended he do so, but also because he felt the need to help people.Mita’s boss graduated from TCU’s athletic training program in 1990. “He was sort of a pioneer for athletic training in Japan, because 15 years ago we didn’t have any athletic trainers in Japan.” Mita said. “I wanted to change from therapy to athletic training because with therapy it’s all about the treatment, but the most important thing to me is to contribute to the players so they can be on the field.”A trainer is available to the players physically and psychologically, Marsh said.”The unique part of athletic training is that you get to know the person as a whole, you get to have relationships with your athletes – you’re one of the first people to know what’s wrong with them … you get to work with them through the entire injury,” Marsh said.Head football trainer David Gable said a lot of the trainers were athletes in high school who ended up with an injury and became interested in athletic training during rehabilitation.Low said he came to TCU to play baseball, but had a heart condition that was deemed too serious for him to play for the team, so he decided to study movement science and go into physical therapy.But even that wasn’t enough to satisfy his passion for athletics.”I didn’t want to leave the actual sports part of it,” Low said. “Physical therapists don’t work with the athletes day in and day out, and I didn’t want to leave the practice field, or the game field.”Mitasaid he also has a passion for sports. He played football in Japan for 12 years.”Football is like food. Food gives you energy. Football gives me energy,” he said. “Football gave me passion, the ability to think and it gave me my personality.”Low said he and Mita’s experiences as athletes help them relate to an injured player’s mental health.Marsh, on the other hand, had athletic training experience as a high school student.”I think it was helpful because I already knew what I wanted to do when I got out of high school,” Marsh said. “I knew what to expect when I got to TCU.”Prior to applying for admission into the athletic training program, students must be accepted by the university.Then they are evaluated on academic performance, recommendations, desire, direction and timing.Chris Hall, the head athletics trainer, said one day he hopes to increase the number of students allowed in the program to 36, but right now the limit is 30.For Mita, being one of 30 is good.”There are many schools in Japan that have athletic training,” Mita said, “but TCU is better because the teacher can understand every student.