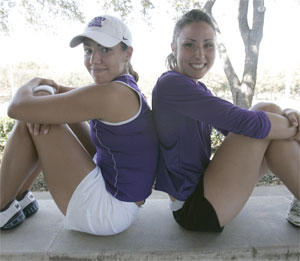 What’s the best part about having a sister in the organization, on the team?Gloriann Lopez: You always have that person for support. Gabby Lopez: You’ve always got your number one fan with you!What’s the weirdest thing about coach Borelli?Gabby Lopez: I don’t really see him as a father figure … but kind of like family. I think it’s a familial relation. Gloriann Lopez: (Laughter) No, I definitely see him as a coach. The weirdest thing about Dave-O … I think the weirdest thing about him is his sayings. He says the same stuff a lot. He knows you understand something and he’ll tell you again anyways.What’s the best attribute about playing in a sport with so many international athletes?Gloriann Lopez: Oh, it’s amazing … you just get to meet so many people that are so different. But you see, we’re all alike too because we all want to win. We all get pissed, you know.Which is better – indoor or outdoor tennis?Gloriann Lopez: Outdoors. I like being out here, I like the sun.Which Grand Slam would mean the most to win? Gloriann Lopez: The French Open. It’s on clay, which is so demanding, you have to be in such good shape.Gabby Lopez: The U.S. Open! I don’t know, representing your country.What’s your prematch tradition or superstition?Gloriann Lopez: I don’t wash my clothes.Gabby Lopez: I don’t shower.Gloriann Lopez: We’re kidding. I have to wear certain earrings; if I wear a wristband and I play well, I don’t wash it. I can’t tell you others, everyone will think I’m weird. Gabby Lopez: Music. It gets me in the mindset.If you could play one sport besides tennis, what would it be?Gloriann Lopez: I’d run the 800 meter. Ugh – no one ever wants to run the 800.Gloriann Lopez: I like it. I have tremendous respect for those people.Gabby Lopez: I’m not sure … I’d be a dancer. You know, like a ballerina!What’s the longest match you ever played; any marathon matches?Gloriann Lopez: It was four and a half hours; I think I won. I kept the ball. It was the only one I’ve ever kept because it was so long. Who’s the better sister; if you played one on one, who would win?Gloriann Lopez: Me.Gabby Lopez: Yeah. When we were younger, I used to kick her … butt … but I’ll let her have it for now.