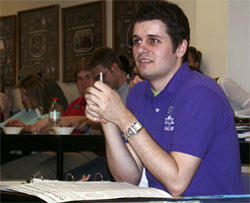 The director of finance for Programming Council resigned last semester after university officials discovered he had mixed student government monies with his personal account, said an assistant dean of campus life.Sebastian Moleski, a senior economics major, said he stepped down from PC after running student government funds through his own account in an effort to create an online payment option for programs and items related to Family Weekend.Moleski said after rumors circulated that indicated he left the position because he had stolen money, he and other representatives did not comment on the situation because, Moleski said, although he could explain theft had not occurred, the issue did not need to be made into a public affair.Moleski said he resigned in November because he was too involved in the situation to continue working with PC’s finances, though he remained involved in other SGA committees until the end of the semester.Michael Russel, assistant dean of Campus Life, said Moleski did not have ill intent in setting up the online payment system.”His personal funds and the (TCU) account were intermingled, which is never a good idea,” he said.Russel said Moleski did not know the correct university procedure for setting up this type of payment system. Moleski made a mistake, Russel said.David Watson, the 2005 SGA president, said in an e-mail that students should focus on Moleski’s contributions to the student body.”Countless people owe him thanks for developing their leadership abilities, for receiving immediate relief when their families’ house was destroyed during Hurricane Katrina and for having their organization receive many more dollars to sponsor their programs than they would have prior to last year,” said the senior entrepreneurial management major.Moleski said PC wanted to allow people to use credit cards to pay for Family Weekend events but said TCU is only equipped to collect online payments for crucial things, such as tuition.He said PC decided to set up a PayPal account to collect the online credit card payments.Once a payment is made to the PayPal account, the money stays there until it is transferred to a regular bank account. Because PC does not have the access to send payments directly from PayPal to TCU’s account, the money was deposited into Moleski’s personal account, he said.Moleski said he took the money out of his account immediately after it was transferred there, but he said the university realized the situation after the last payment it was supposed to receive for Family Weekend came in from the PayPal account a week late. “The part where it involved my own finances was poor judgment,” Moleski said, “No question about that.”Russel said an accountant audited the books when the situation was revealed and found there was no money missing. The total credit card sales for Family Weekend were between $8,000 to $10,000, Moleski said. He said if PC had more time, it might have been able to run the system through the university.Russel said online payment systems have been created for other offices and that it will eventually be set up for SGA.Moleski said he ultimately resigned because he, “didn’t want anybody to think (he) was taking advantage of (his) office.”Moleski said he is not participating in SGA this semester because he is focusing on graduating.