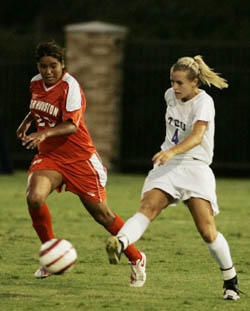 The Horned Frog women’s soccer team battled for 90 minutes earning a bittersweet victory to bring their season record to 4-3-0.The 2-1 win over the Sam Houston State University Bearkats was played before a crowd of 1,099 fans at Garvey-Rosenthal Soccer Stadium Friday night.The first half was dominated by TCU as they made their mark on the scoreboard first with a goal by freshman Chelsea White assisted by senior Karissa Hill. The goal was White’s second of the season and it was set up by a rolling pass from Hill that met White’s right boot from three yards out. The shot beat goalkeeper Melissa Sauceda and put TCU out to a 1-0 lead 10 minutes into the match.The equilizer by the Bearkats came in the 20th minute was initiated by a long range chip from Brittany Foerstner that found striker Yoanna Garcia in the air for a volley that found the net past the outstretched arms of TCU keeper Katy Buchanan.Minutes later, freshman midfielder Michele Nguyen found the net on an unassisted shot from about 20 yards out. The ball bounced underneath a diving Sauceda as Nguyen notched her third goal of the season.”The defense left a huge gap and I took the opportunity to hit it,” Nguyen said. The second half of play found both teams sharing equal possession of the ball and a one goal lead for TCU to preserve. “I think it was one of those games where the tempo slid out of our favor,” head coach Dan Abdalla said, “and we needed to keep the pace at our level.”Abdalla said the lineup for the game was missing a few players so that he could rest the team for the trip to Nebraska for the Sunday matchup. “We had some players that were not player and we knew it would be a battle,” Abdalla said. The battle had TCU ripping shot after shot on the Sam Houston goal, but none of the 19 second half shots managed to find the back of the net.Abdalla said that the TCU had their chances to score but they needed to do a better job of finishing. With 14:28 remaining on the clock, a silence fell over Garvey-Rosenthal Stadium as junior midfielder, and lead goal scorer Lauren Pope fell to the ground with what looked to be a knee injury.”We don’t know what is wrong just yet, we will have to find out what the hospital says,” Abdalla said. After the injury, the match began to wind down, giving the Bearkats fewer and fewer scoring opportunities. The final chance came on a free kick for Sam Houston in the closing seconds, but the cross was thwarted by a jumping save from Katy Buchanan.”All I could think was we’ve work this hard for 90 minutes, we can’t let them tie it now,” Buchanan said. After the game, Pope was taken to a hospital for her knee to be examined, but as of now there is no information on the extent of her injury. Taking Pope’s place in the center of the midfield line will be Michele Nguyen, Abdalla said.Though Nguyen said she has played center midfield before; she added, “It is a big repsonsibility taking her place, because Pope is such a great player.”No further information about Pope’s condition is known as of 10:30 PM on Friday said Ryan Schulz, coordinator of athletics media relations. The team departs Saturday morning for their match on Sunday against Nebraska.