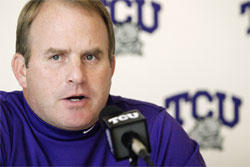 Coming off of two morale-rattling losses to the BYU Cougars and Utah Utes, the football team has been taking it slowly by having only six practices in the last 16 days in order to allow players to catch up with academics.At his Coaches’ Luncheon Tuesday, head coach Gary Patterson said practices have been about an hour and a half long and consisted of 17 five-minute periods.”We did a lot of stuff that was going to try to get us working at a higher level,” Patterson said. “I’m really excited about just getting back into a routine.”Patterson said one of the things that really hurt the team was the timing of midterms. “Academics got killed,” Patterson said, “because two Thursday games hit right in the middle of midterms, so we’ve spent the last week just trying to catch up on class work.”Last year, Patterson said, the Frogs ended their regular season Nov. 12. This gave players who were having academic issues a month to catch up.”This season, we end on Dec. 2 and then the next week is finals,” Patterson said. “You do not have time to catch up this year. I knew that going into the season, and, with young players, time management is always an issue, so we tried to help them out with that.”When asked about the overall mood of the team following the two losses, Patterson said the team is still upbeat and ready for its next challenge.”I think they are doing good,” Patterson said. “When you talk about being physical, you are not talking about being negative. People think working hard has to do with negativity, but that is not the case.”On the topic of the Frog’s upcoming game against Army, Patterson said he expects to see the team that beat the Baylor Bears and the Texas A&M Aggies – not the Army team that lost to the Rice Owls on Sept. 30.”You should throw the Rice game out,” Patterson said. “That was the midterm week for The Academy, and everyone wants to play them during their midterms because they are up all night and trying to practice if they can. Historically, they don’t do well during their midterms.”Patterson said Army is very consistent with its special teams and has a great defense. The last two times TCU has played Army, the games have been played fiercely and close on the scoreboard, he said.