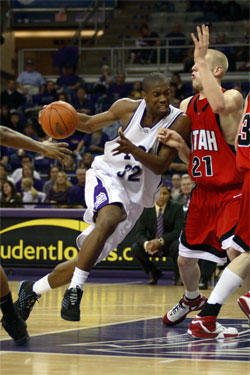 The men’s basketball team is working on finishing plays in order to weasel its way out of an eight-game losing streak, the head coach said.”We’re doing things daily to train and trying to do things to win in a conference that is very good this year,” head coach Neil Dougherty said. The Frogs (10-12, 2-8 conference) will play the Mountain West Conference leading Brigham Young University Cougars at Daniel-Meyer Coliseum on Saturday night. The Cougars (18-6, 8-2) are on a five-game winning streak and have taken the last three games on the road. BYU’s squad features forward Trent Plaisted, who was last week’s MWC Co-player of the Week, and forward Keena Young, who is averaging 16.5 points and shooting 81 percent from the free-throw line. The Frogs will have to be able to guard the Cougars’ interior game as well as the perimeter, Dougherty said. “It’s an inside-out issue, we’ve got to figure out how to get help inside and guard on the outside,” Dougherty said. When the two teams faced off Jan. 10, the Cougars came away with a victory and initiated the Frogs’ skid.The Frogs have to play their way out of their losing streak, where most of the games were lost in the last minutes of the game, senior point guard Neil P. Dougherty said. “We still have a positive attitude, and we’re working hard,” he said. “We have to dig ourselves out and get ourselves out of it.” Although TCU has shot 36.9 percent from the field throughout its losing streak, it has averaged 14,25 offensive rebounds in its last seven games. The Frogs have struggled to have an entire team effort for all 40 minutes.In the last two losses, noteable performances came from guard Brent Hackett and forward Blake Adams, who each put 22 points on the board. Neil Dougherty said his team has been trying to have consistent play and feels they’ve been getting closer.