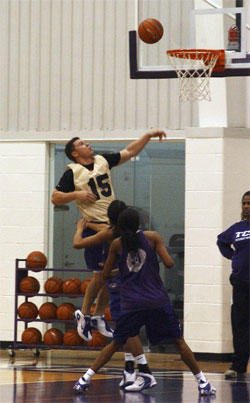 Throughout the history of collegiate athletics, athletic programs have been searching for ways to gain an edge against the competition. For the Lady Frogs women’s basketball team, using male practice players on a daily basis has become the norm not just for them but for a vast number of women’s college teams across the country.If the NCAA’s Committee on Women’s Athletics has its way, that won’t be the case for much longer.In a Dec. 6 position statement, the CWA stated the use of male practice players violates the framework for equity and diminishes participation opportunities built by Title IX. With women comprising 57 percent of the college student population and only 43 percent of athletic opportunities, the statement takes a position that the use of male practice players sends a negative message to bench players that “you are not good enough to make our starters better, so we need to use men instead.”The proposed legislation is drawing criticism from women’s basketball coaches nationwide, including Horned Frogs head coach Jeff Mittie, who said that some people have a general misunderstanding of why male practice players are used during practice and why they are important. “It’s a very useful part in improving the women’s basketball game,” Mittie said.In the position statement, the CWA believes the practice time that is given to men is doing a disservice to the female student-athletes who are “missing their own chance to improve their skills.”Mittie disagreed with the assessment, stating that the use of male practice players has an opposite effect in that it allows the players to focus solely on improving their own team’s weaknesses instead of having to learn another team’s offensive and defensive sets.”Players don’t like being scout players,” Mittie said. “The players are focused on getting better and not having to worry about running someone else’s stuff.”Although he understands why the CWA is coming down on male practice players, practice player Tommy Holtz said the pros outweigh the cons when debating the use of male practice players. Holtz, a junior advertising and public relations major, said male practice players help make practices feel more like a game than a practice, and the male players help protect the women’s team from potential injuries that may occur during the flow of practice.”If one of us gets injured, we don’t have to play in a game on Saturday,” Holtz said.As a male practice player, Holtz receives a T-shirt, a pair of basketball shoes, a practice jersey and the opportunity to sign up for classes early since he is considered an athlete and needs to build his schedule around practice. The CWA states that this kind of funding is “contrary to the good of the whole enterprise.”Members of the women’s basketball team such as junior forward Jenna Lohse joined in the debate and said she doesn’t understand how the CWA can be so adamantly against the use of male practice players. The male players give the women’s team more of a challenge due to their intensity level as well as their ability to jump higher, Lohse said. When playing against the males, it forces the team not to hold anything back.”When you play against your teammates, you kind of hold back,” Lohse said, “but with the men’s practice squad, we get more aggressive.”While the legislation has yet to make its way to Division I athletics, it has been tabled for an April discussion for Division III athletics, which could be a sign of things to come.”The issue regarding the use of male practice players is working its way through the NCAA governance process at various levels,” said Joni Comstock, the NCAA’s senior vice president for championships and senior woman administrator, in a Dec. 19 press release.”There is no clear consensus yet, and the discussion is energetic … We will simply have to follow the debate and see what consensus emerges.