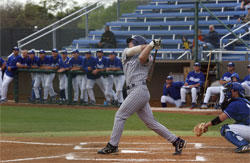 The Horned Frogs baseball team is riding a season-high five-game winning streak as head coach Jim Schlossnagle takes his team to Provo, Utah, to face the BYU Cougars in a three-game road series.Tuesday night, against the UT Arlington Mavericks, some timely two-out hits by senior outfielder Austin Adams and junior catcher Andrew Walker brought the Horned Frogs five runs and kept the winning streak alive.During the winning streak and since a 0 for 4 performance against Texas Tech on March 11, Walker has nine hits in his last 20 at-bats, capped off by a five-RBI showcase against the Mavericks. Both of Walker’s homers this season have come off of UTA pitching, as well. Last season, TCU was able to put away the Cougars in five of six games and outscored the squad by a total 24 runs. Walker hit a sizzling .400 in the six 2006 contests against BYU.Walker said his current hot streak is stemming from a more calm approach at the plate.”I feel more relaxed, and I found a stroke that’s working,” Walker said. “I’m seeing pitches well out of their (pitchers’) hands.”BYU brings a 13-8 record in 2007 to the series but will be coming off a Tuesday night loss to the Utah Utes. The series will be a three-game set, but, because of a BYU policy, the games will take place on Thursday, Friday and Saturday, rather than a traditional Friday through Sunday matchup.Statistically, the teams are very evenly matched as only fractions of a point separate the teams in batting average, ERA and slugging percentage. TCU and BYU share the conference lead in home runs with 16 a piece.Other players who have been leading the Horned Frogs this season have been junior pitcher Sam Demel, who has stranded all nine inherited base runners this season, and senior center fielder Keith Conlon, who is leading the team in home runs, triples and batting average.The road trip for the Horned Frogs will not come to a close after the games with the Cougars. TCU has another mid-week game slated with the No. 16 Texas A&M Aggies in College Station on March 27.