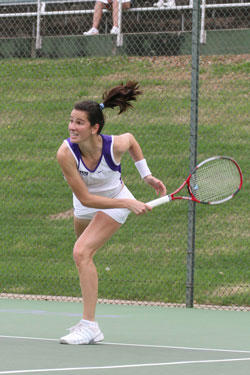 The No. 46 women’s tennis team upset a high ranking team tonight by cinching a 6-1 win.Playing against No. 25 Virginia Commonwealth Rams, TCU’s nationaly sixth-ranked doubles team of seniors Ana Cetnik and Anna Sydorska started off the match by toppling the second-ranked doubles team in the nation, Mariana Yuferova and Olga Orisova.Cetnik and Sydorska lost some momentum after giving up their 2-0 lead to let VCU tie it 7-7, but with their backs against the wall, Cetnik and Sydorska clawed their way back to a 9-7 win.TCU cinched the doubles point with freshman Nina Munch-Soegaard and junior Kewa Nichols knocking off VCU 8-5 on the second court. Despite the wins on the first two courts, the third doubles match of sophomore Amy Beck and junior Andrea Morgado got wiped out 0-8.”It was serious,” Beck said of her match. “We lost, but we got a little better every game.”In the singles matches, TCU knocked off VCU by winning five of the six courts.Sydorska, playing in the No. 1 spot for TCU against Yuferova, won her first set 6-1, but lost in a tie-breaker the second set 6-7. As the last TCU player on the court, she rallied back to win the third set 6-4.Munch-Soegaard played in the No. 2 spot for TCU against Borisova. Like Sydorska, Munch-Soegaard forced the match to the third set to win it 4-6, 6-3, 6-4.Munch-Soegaard said it was a difficult match against the Rams’ Borisova, who is well over 6 feet tall. “You can’t lob over her,” Munch-Soegaard said. “It helped to hit low at her because she couldn’t hit those very well.”Another star player for the Frogs was Morgado, who was down 1-6 and 3-love, but fought her way back to win her match on the fifth court. Head coach Jeff Hammond said his team played smart against a seasoned team.”We really read the flow of the game well,” Hammond said. “If our opponents were missing shots, we kept playing that way, but if they were making some wins we would have to re-adjust.”Munch-Soegaard said the Rams were relentless at making shots.”(Borisova) just kept getting every ball back,” she said. “It was tough.”Both TCU (9-7) and VCU (17-5) were coming off previous losses prior to this match. VCU’s highest ranked player, No. 26 Tatsiana Uvarova, was missing from the entire match.TCU will begin conference play Thursday at home against the New Mexico Lobos at 5 p.m. Hammond said today’s match will provide some great momentum for the start of conference play.”We just have to ride that wave into conference matches,” Hammond said.