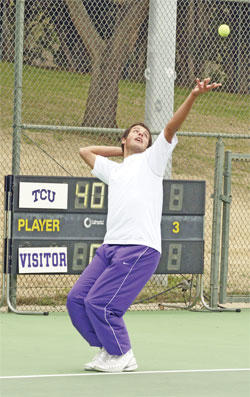 Senior Day was most likely the most memorable day in the 2007 season as the TCU men’s tennis team upset No. 46 New Mexico, 4-2 Sunday afternoon.The match was the last at home for the Frogs. It was also the last match of regular season play. New Mexico jumped out to an early lead as Kamil Pajkowski defeated TCU Stuart Row in straight sets, 6-2 6-0. The win in court six gave New Mexico the 1-0 lead.TCU’s Kriegler Brink brought the Frogs back into contention as he dominated New Mexico’s Miles Bugby on court four. The 6-1, 6-0 straight sets victory captured the first point for the Frogs. A strong service game helped Brink to control the match for the win.In court five, New Mexico’s Chris Parkes defeated TCU’s Andrew Ulrich in straight sets. The 6-4, 6-0 victory was the second and final point the Lobos would gain in the afternoon.A battle for the final three points would come from the top three courts. In court two, it appeared that New Mexico’s Johnny Parkes was going to snap TCU’s Chris Brio’s four match winning streak after Parkes won the first set, 6-1. Biro battled back in the second set breaking Parkes’ serve to take a 5-4 lead. Brio would go on to capture the second set, 7-5. Carrying the momentum into the third set, Brio was able to come back and beat Parkes 6-3 to even the afternoon’s score, 2-2. TCU’s Radu Barbu lost a tough first set to New Mexico’s Graeme Kassautzki, 7-5 but the senior was able to re-focus and come back for the 6-4 victory in the second set. “I was trying too hard to win the entire set during the first set,” said Barbu. “So, I was trying to focus on winning each individual point the rest of the match.” Barbu’s focus and Kassautzki’s inability to quality service points lifted Barbu to a 6-3 victory in the third set. The win gave the Frogs a 3-2 lead, leaving the victory up to No. 109 Cosmin Cotet. Cotet breezed his way through the first set 6-1 against New Mexico’s Max Jones. Jones, however had different plans, evening up the match with a 7-5 victory in the second set. Cotet pressed on with the backing of his teammates and was able to break Jones’ serve in the sixth game to take a 6-5 lead in the third set. Cotet would go on to serve for not only his individual win, but a win for the Frogs. “We had great effort,” head coach Dave Borelli said. “This was our best win of the season.” The Frogs’ victory improved the team’s conference record to 5-1. The team finished 9-11 for the regular season. New Mexico’s loss dropped the team to 3-3 in conference play and 14-8 on the season. TCU’s win helped the team to obtain the No. 2 seed at the Mountain West Conference Championships. The team returns to action when they head to Colorado Springs, Colo. to compete at the MWC Championships held April 26-29.