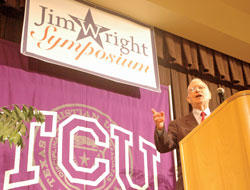 American foreign policymakers need to rely more on diplomacy and less on force, the leader of the Iraq study group said Tuesday.Lee Hamilton, who spent 34 years in the House of Representatives and chaired several committees related to the Middle East, said he doesn’t believe the notion that America is in a state of decline.However, Hamilton said since Sept. 11, America’s power has diminished and needs to practice pragmatism in foreign policy and reach consensual decisions rather than dictating policy to other nations.Instead, decision-makers need to learn they cannot shape the world in one grand transformation, Hamilton said.”We have to settle for a stable society, not a model democracy,” Hamilton said.After Sept. 11, Hamilton said, President Bush applied American power extensively in the Middle East and relied less on alliances and more on “ad hoc coalitions of the willing.”Hamilton said government officials need to have a greater appreciation for our allies and learn that they cannot face the world’s problems alone.”We should share the burdens (of the world) with others who seek a world order that is peaceful and just,” he said. “I think that’s a realistic and balanced view of American policy.”Also, Hamilton said, policymakers need to listen to the American people with a sensitive ear. Hamilton cited a recent poll of Americans that called for an exit strategy on Iraq, less dependence on foreign oil and improved relations with other nations.Hamilton said what the American people want makes pretty good sense.”In Indiana, we call that down-home judgment,” Hamilton said.Hamilton wasn’t all business, though. He told the audience he wanted to create a public servant hall of fame.”I can absolutely guarantee that on that first ballot, Jim Wright will go into that Hall of Fame,” he said.Allison Osuniga, a junior health and fitness major, said she enjoyed the symposium.”It’s neat that TCU gives us the opportunity to come and listen to great speakers like Lee Hamilton,” Osuniga said. “The symposium was a great experience for me to learn from a great political leader like him.