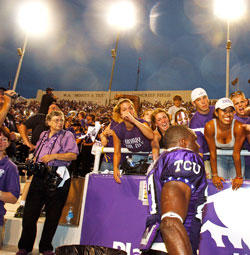 A photojournalist’s pictures have helped define the TCU community and now, her place in Horned Frogs history has been cemented.Linda Kaye, a devoted photojournalist, was inducted into the Schieffer School of Journalism Hall of Excellence on Tuesday night in a special ceremony that took place in her room at a hospice care center, said Tommy Thomason, director of the Schieffer School of Journalism.Thomason said she will be officially inducted next fall.Kaye, 65, is suffering from uterine cancer and recently checked into a local hospice facility.She has worked as a photojournalist for several local news outlets and has covered everything from professional football to President John F. Kennedy’s visit to Texas on the day he was assassinated. She was also a photographer and reporter at the Skiff during her time at TCU.”We feel like it was important for someone like Linda to receive this award,” Thomason said. “For so many years she has done so much for other people. She needs to realize she is appreciated both personally and professionally.”Phil Record, a TCU professor and retired Star-Telegram editor and executive, said she has a passion for the job.”She has been a part of the Texas sports scene for 35 years,” Record said. “She is always there.”Thomason said she is completely dedicated to her craft.Kaye has worked for the university and the athletics department as a photographer covering campus events and TCU athletics.”She is part of the furniture of TCU, attending every athletic event, graduation and convocation,” Thomason said.He said when people think of the symbols of TCU they think of the Horned Frog, Frog Foundation, the upper deck of Amon Carter Stadium and Linda Kaye.Eric Gay, a staff photographer for the San Antonio bureau of the Associated Press, worked alongside Kaye for many years.”She is always wearing purple,” Gay said. “Her whole closet is purple. She basically bleeds purple but she doesn’t have a purple heart – she has a heart of gold.”Frank Windegger, TCU’s athletics director from 1975 to 1998, has known Kaye since 1959.”She is an institution in and of herself,” Windegger said. “She has covered everything.”Windegger said she was more than a photographer, though, she was also the Frogs’ No. 1 fan. Every player knew her name.Thomason said as important as TCU is to her, it is just a part of her whole career in photojournalism.”I regret that too few never saw her beyond her work at TCU,” Thomason said. “It is just one facet of a rich and varied professional career.”He said she is a respected photojournalist in the Dallas/Fort Worth area.”Kaye is known for the excellence of her work and had many admirers among other professionals in the area,” Thomason said. “Photojournalism is not just what she does, it is who she is.”Record said to her the product is more important than the paycheck. She has a love of sports and a love of photography.Thomason said one thing students can learn from Kaye’s life is success is partly talent and preparation, but largely dedication to what they do.Gay said she cares so much for other people.”She is a giver, not a taker and has one of the most generous hearts of anyone I have ever met,” Gay said.