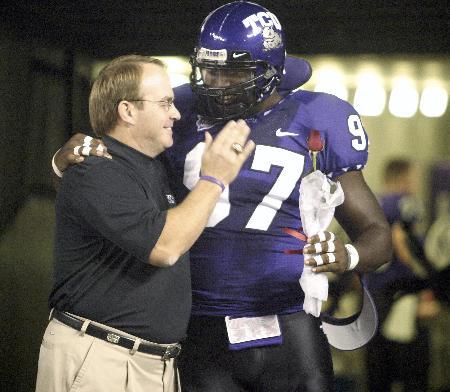 In the final home game of its season, TCU sent the Horned Frog seniors out on a high note, with a bowl qualifying 34-10 victory over the University of Nevada-Las Vegas.With its sixth win on the season, TCU qualified for a post season bowl, but head coach Gary Patterson said he believes a seventh victory over season ending opponent San Diego State University is necessary for a bowl invitation.”I didn’t really get that excited downstairs,” Patterson said. “It’s a two game season and we’ve won one of them.Sophomore quarterback Marcus Jackson said the team feels a seventh win is necessary.”We’re not going next week thinking we’re in a bowl,” Jackson said. “We feel like our backs are against the wall.” Senior linebacker David Hawthorne said the team has to remain calm for the next game and prepare as they would for any team.”We have to keep it calm in our hands and not make it a Super Bowl,” Hawthorne said.The real story of the night was TCU’s run play, both defensively and offensively.The Horned Frog defense shined bright against the maligned Rebels, allowing only one touchdown, which marks only the second touchdown given up to the Rebels in the three games the teams have played as Mountain West Conference opponents.The TCU defense was stifling, allowing the Rebels only 12 rushing yards. UNLV’s scrambling quarterback Travis Dixon, who opened the season with a 129 yard rushing effort, faced consistent pressure from the Horned Frog defense and was held to negative five yards rushing.Hawthorne said the team’s main focus was to stop the run and the team did a great job doing that against UNLV.Patterson said the run defense was so successful because they clamped down early and were able to put up good numbers offensively, forcing the Rebels to effectively abandon the running game.”When you get behind as far as they did then it becomes a passing game,” Patterson said.The Senior Night game was the final game at Amon Carter Stadium for 20 Horned Frog football players.Senior defensive ends Chase Ortiz and Tommy Blake established a two-headed monster attack, pressuring Dixon throughout the night.The TCU offense showed its worth, especially on the ground where the Frogs had four touchdowns coming from three different players and 251 yards rushing.Not everything went as well for the rushing unit, which lost junior running back Aaron Brown to a season-ending injury, Patterson said.Brown entered the season as the Mountain West preseason offensive player of the year, but has been hampered by injury since TCU’s opening games against the Baylor.Sophomore running back Joseph Turner got things rolling for the Frogs with a three-yard touchdown run on TCU’s first possession.”I believe we’re a running team here,” Turner said.Turner finished with 61 yards rushing.In TCU’s ensuing possession, quarterback Andy Dalton showed he has a pretty good pair of legs in addition to an arm with four rushes for 40 yards, capped off with a three-yard touchdown run.Junior running back Aaron Brown soon joined Turner and Dalton with his own 10-yard run for six points.Not to be outdone, Dalton added another rushing touchdown to his stat sheet with a three-yard run with 2:38 left in the second quarter.Dalton finished the game with 73 yards rushing and led the team in total rushing yards for the second game in a row.Turner said he had no idea Dalton could be so effective on the ground and seems to be maturing.”I think he’s starting to come out of his shell, starting to get more comfortable,” Turner said.Patterson said having a quarterback who can run and throw is a real help to any team.”You don’t have a coverage made up that covers the quarterback,” Patterson said. “It really adds another dimension and makes them account for them.”Patterson said the increased emphasis on rushing is in part an attempt to control game time and flow.He said not only does it help win the game, controlling the clock limits the amount of injuries a team can suffer, which is just as important.Patterson said the season is winding down well for the Horned Frogs, but San Diego will still be a challenge.”We are kind of coming into our own a little bit. It’s a little bit too late, but we’ll take it, Patterson said. “You have to get to seven. We earned one more tonight, and San Diego State plays a lot better at home.