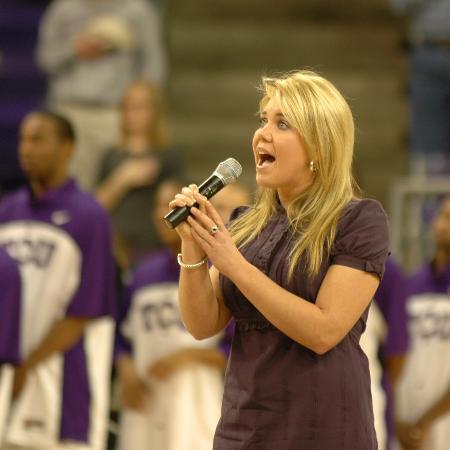 Silence engulfed the buzzing at the Daniel-Meyer Coliseum before TCU played New Mexico.

As senior radio-TV-film major Lauren King took center stage and sang the national anthem Tuesday, her voice reverberated through the coliseum. King, one of the contestants for the National Anthem Idol contest organized by athletics marketing department, unveiled her vocal aptitude in front of more than 3,000 people.

“It was just another performance,” said King, who has been singing the national anthem at volleyball and baseball games. “I liked it a lot.”

King is one of the seven contestants who have been performing at the TCU basketball games.

The audition for the National Anthem Idol began November at the University Recreation Center. It was an open call for anyone 16 to 28, said Mandi Lynne Knight, marketing assistant and coordinator of the event. Fifteen participants, all TCU students, showed up for the preliminary round and were judged on how well they knew the words of the national anthem, how well they hit the musical notes and their voice quality, Knight said.

“I was really surprised by the turnout,” said John Festervand, assistant director of athletics marketing. “It’ll grow into a tradition.”

The 15 participants were narrowed to seven, who have been performing at basketball games. Four semi-finalists will be chosen through online voting at TCU’s athletics Web site, gofrogs.com. The athletics marketing department, athletics director Danny Morrison and season ticket holders who have heard all the contestants will judge the winner.

“Everyone in the competition has a distinct voice and that’s what makes it unique,” Knight said. “They all love to sing and share the same passion of singing, and TCU students really want to do something positive that showcases their talent while honoring our nation.”

King heard about the contest through e-mail and went for the audition.

“I’ve been singing my entire life,” King said. “I’ll be happy and excited if I win, and it wouldn’t put a scar on me if I lose.”

Joan Robinson, one of the event staffers at the game who has listened to all the contestants, praised King’s performance.

“She’s the best one I’ve ever heard,” she said.

Knight said the National Anthem Idol contest was proposed to boost attendance at the games.

She said the main objective of the show focused on creating a competition that would last for several years, promote TCU’s diverse talent and honor the nation in a unique way.

Festervand said the competition also helps add to the environment at Daniel-Meyer Coliseum.

“We put a great product on the court but one of our goals was to enhance our overall fan experience,” Festervand said. “By doing the national anthem we’re hoping the fans have fun and come back.”

George Bradford, class of ’64, said anything the athletics department does to help the fans have a better experience at the games is good.

“College sports is not only about games,” Bradford said. “It’s what goes on around the game that makes it fun.”

The National Anthem Idol will get a prize package from the athletics department, open the 2008 baseball season with the national anthem and perform at a public venue, which will be disclosed March 8.

The preliminary round will end Jan. 30, and the four semi-finalists will perform in the following games until Feb. 2. The National Anthem Idol will be announced March 8 during halftime of the final game against Baylor.