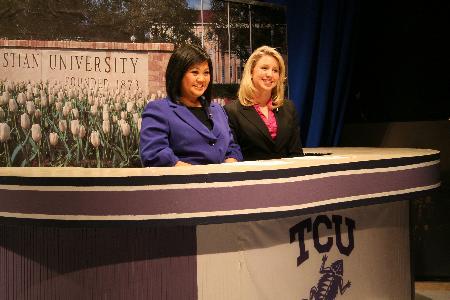 TCU News Now is a daily newscast this semester with the help of new professional equipment, technology and a CNN news feed, said a News Now staff member.

Rebekah Hood, junior broadcast journalism major and executive producer of News Now, said News Now is now a CNN affiliate, enabling them to receive raw footage and news packages from CNN and use it on News Now.

Tommy Thomason, director of the Schieffer School of Journalism, said the technology, called Pathfire, cost about $20,000. A satellite on the roof of the Moudy Building connects with CNN’s satellite and downloads newscasts to the News Now server, he said.

Thomason said after deciding which news feed to use, he purchased the equipment directly through CNN.

The new technology allows News Now to broadcast footage not directly linked to TCU, such as celebrity news and coverage of the elections, said Susan Gilmartin, a senior broadcast journalism major.

Michelle Buckalew, a journalism instructor and News Now’s adviser, said in an e-mail the equipment will give broadcast students a more realistic newsroom experience and better prepare them for a career in broadcast news.

“It is the same equipment that is utilized in hundreds of newsrooms across the country,” she wrote. “A video news source is an important tool to any broadcast news organization.”

Buckalew said the information in the shows will not just come from CNN, but will also include student-based enterprise stories, information gathered in collaboration with the Daily Skiff and other news sources.

Last year, News Now consisted of a 20-minute show that featured the same packages on rotation all week, Hood said.

“The biggest difference is that we get more production time,” Ferguson said. “The show is new four days a week, it’s not the same thing 24/7 anymore.”

This year the team has more access to everything found in a professional newsroom such as switchboards, lights and a newly painted anchor desk from the radio-TV-film department, Hood said.

The 12 members of the staff are individually assigned a certain subject on campus to report on at all times, Hood said. News Now also rotates the roles of producer, anchor, editor and studio manager each week, she said.

“It gives everyone a chance to learn something new,” Gilmartin said. “We also don’t have to blindly think about what to show on News Now.”