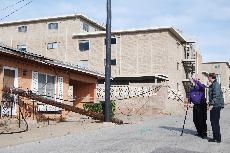 Two telephone poles and another smaller pole fell Tuesday afternoon when a Coca-Cola delivery truck’s top corner caught some wires in Worth Hills, and students will not be able to drive through the area near the accident for a while, a TCU police officer said.

One of the poles fell into a house on Pond Drive ÃÂ­- the street that connects Worth Hills to Bellaire Drive North – and a neighboring apartment complex. Nobody was injured.

TCU Police Sgt. Alvin Allcon said the power company was investigating the damage. He said he doesn’t know damage costs yet and the company is investigating how to prevent similar accidents by raising the wire height and adding clearance signs.

The homeowner, who denied to identify herself, said the electricity went out briefly but was restored.

Ryan Murray, a sophomore history major who lives in Worth Hills, said it’s inconvenient to have only one exit from the area. He said Pond Drive was the most convenient route in and out of Worth Hills.

Allcon said one of the poles that fell Tuesday was a new pole because the previous one fell last week.

Video from the site