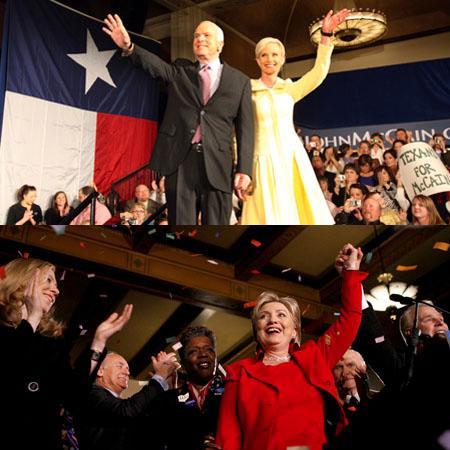 After encouraging students to participate in early voting last week, one student political group still had work to do Tuesday.

About 12 volunteers from the TCU Students for Barack Obama walked to Paschal High School on Tuesday to encourage people who voted during the day to return in the evening to participate in party caucuses.

It is the first time in a long time that the long-ignored evening caucuses have mattered for Texans.

After a weekend that had Democratic frontrunners almost tied in the polls, the Democratic race remained too close to call for most of the evening. Major TV networks projected that New York Sen. Hillary Clinton won Texas. Clinton also won a crucial victory in Ohio and won Rhode Island earlier in the night after Illinois Sen. Barack Obama overwhelmingly took Vermont.

Meanwhile, Sen. John McCain, R-Ariz. won all four states decisively, earning more than enough delegates to clinch his party’s nomination. McCain’s only remaining rival, former Arkansas Gov. Mike Huckabee, bowed out of the race early in the night in Irving and vowed to support McCain for the presidency.

Trey Flowers, a 2007 graduate, said he came back to TCU from his home state of Tennessee, where he worked with the Obama campaign in Nashville, to raise awareness among students.

“There are a whole range of issues we face as college students,” Flowers said. “If we don’t send a leader to Washington with the courage to stand up for us, then the issues we face today are going to turn into insurmountable problems down the road.”

Marley Clements, a sophomore premajor and co-coordinator for TCU Students for Barack Obama, said college students would be the most affected by the results of the election because the problems the president would deal with during his or her term would be the problems of their generation, such as the Iraq war and health care.

Megan O’Brien, a junior art history major, said it was important for her to make her opinion known.

“I don’t want to be involved in that generalization that young people are apathetic, because that does not describe me at all,” O’Brien said.

More than 1,200 citizens from four precincts voted in Tuesday’s primary elections at Paschal, with the Democratic Party reporting about 785 voters, and the Republicans attracting about 432, according to each party’s election judge. That difference was indicative of a statewide trend, with 65 percent of Texans attending Democratic primaries.

Stormy Lovett, an election judge for the Democratic Party, said many young voters showed, and the black and Hispanic turnout Tuesday was higher than she saw at last year’s local election.

“As far as the Democratic side, it’s been quite moving, and I’ve been voting for 20 years,” Lovett said. “The red state ain’t red anymore – it’s purple.”

Following the closing of the polling stations, more than 400 people filed into the school auditorium for the Democrat caucus at Paschal, while about 30 gathered in a classroom for the Republicans across the hall.

Greg Hughes, another Obama precinct captain, said the caucus at Paschal determined 17 delegates to go to the state convention. Of the 228 state delegates for the Democratic Party, 126 delegates were decided by primary votes and 67 were determined by caucus results.

Texas accounts for 140 Republican delegates, 96 of which are determined by primary vote. Three delegates are assigned to each of the state’s 32 congressional districts for a total of 96 delegates.