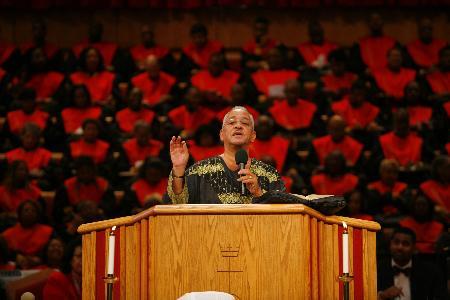 The decision to continue with a banquet honoring the Rev. Jeremiah Wright was met with varying opinions from students, faculty and alumni of TCU and Brite Divinity School.

Chancellor Victor Boschini could not be reached for comment, but said in an e-mail statement that Brite and TCU were separate entities and the decision to award Wright was Brite’s, not TCU’s.

“As a university, TCU supports the right of free speech even when the opinions expressed are controversial,” Boschini said. “That is what a university is about. But giving an award is another matter, and in this specific case in light of Rev. Wright’s recently discovered remarks, TCU would not give such an award.”

Tim Hessel-Robinson, assistant professor of spiritual disciplines and resources at Brite, said he took a class taught by Wright at the Seminary Consortium for Urban Pastoral Education in Chicago. He said accusations about Wright’s words have most likely been taken out of context.

“He’s been portrayed as a divisive figure, and I do not agree with that,” Hessel-Robinson said. “In my experience, he was gracious, generous and accepting of all students, regardless of race.”

Anthony Butorac, a sophomore radio-TV-film major, said he created a group on Facebook opposing the ceremony.

“It appalls me that Brite, a religious school, would condone a man who has said such hateful words toward other people,” Butorac said. “Because in my mind, in his sermons, there’s a lot of racist and very focused hateful words pointed at people outside the African-American race.”

Don Cram, president of the Fort Worth chapter of TCU Alumni, said he was disappointed in Brite’s decision.

“I think his anti-American comments are pretty well documented and those things need to be considered when choosing someone to honor,” Cram said.

Obama has long cited Wright as an important influence, but controversy about their relationship has simmered for months and finally boiled over last week when television stations began airing video of the pastor’s condemnation of American racism and U.S. foreign policy.

Obama issued a statement Friday repudiating the “inflammatory and appalling” remarks by the pastor that had escalated the controversy. On Monday, Obama repeated that he thinks Wright’s statements are “wrong, and I strongly condemn them.”

He added that “the caricature that has been painted of him is not accurate.”

In video clips of his sermons, Wright insisted that the U.S. brought the Sept. 11 terror attacks upon itself because of a corrupt foreign policy.

Wright has also called America the No. 1 killer in the world” and in a 2003 sermon said, “The government gives them the drugs, builds bigger prisons, passes a three-strike law and then wants us to sing ‘God Bless America.'”