Panelists: Presidential hopefuls will not be running mates 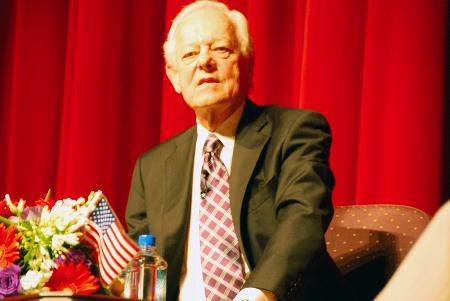 Schieffer, a 1959 graduate and moderator of CBS’ “Face the Nation,” sat down with a panel containing “311 years of experience” to discuss the presidential campaign at the symposium, titled “Is Campaign ’08 the Right Stuff?” Panelists included Al Neuharth, founder of USA Today and chairman of the Freedom Forum; Robert Novak, syndicated columnist for the Chicago Sun-Times and commentator for Fox News and Bloomberg News; and Roger Mudd, former CBS and NBC News correspondent. Andrea Mitchell, chief foreign affairs and lead political correspondent for NBC News, was scheduled to attend but did not because she was sick, Schieffer said.

The Democratic vice presidential ticket was a main topic of conversation. All three panelists agreed that neither Sen. Hillary Clinton nor Sen. Barack Obama would choose each other as a running mate.

“I believe that Obama will not put Hillary on his ticket,” Mudd said. “And Obama will definitely not be on the ticket for Hillary because Bill would be living in the White House.”

The journalists said the race will be Democratically focused.

See photos from the symposium

“I believe there are two styles of government that are involved in the race and I honestly agree with both,” Novak said. “Vote for the candidate who agrees with you – that’s who everyone should vote for.”

Neuharth, who called himself politically independent, said the focus of the campaign will be different in the fall.

“Issues that are being focused on right now, such as the economy and Iraq, will fall secondary. The new issue will be age,” he said. “Since the Constitution has a minimum age of 35 for the president, there should be a max age of 65 too.”

Novak agreed and said the war in Iraq is not the dominant issue today.

“The situation is I am against the war in Iraq – I thought it was a huge mistake and I told Bush that and haven’t been invited to the White House since,” Novak said. “But the reason it is not a big issue anymore is because we don’t have a draft. The real issue is whether the American people are ready for an African-American president.”

All four journalists said they look forward to covering the 2008 elections because whoever wins the presidency, history will be made.

“I must say I cannot recall any elections that were just down right exciting like this one,” Schieffer said.

Watch a video from the Schieffer Symposium