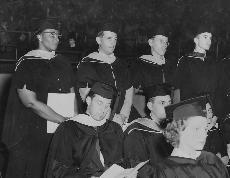 The civil rights movement of the 1950s and 60s produced many noteworthy religious leaders in the black community, and Fort Worth residents are mourning the loss of one of their own.

Vada Phillips-Felder, who was the first black female graduate of the Brite Divinity School in 1954, died this summer at 97 after spending most of her life giving back to the community.

Phillips-Felder was an elementary school teacher and then a pastor’s wife before she became a widow in her early fifties.

One summer day in 1952, she picked up a newspaper on a train, and what she read changed her life.

An article in the Fort Worth Star-Telegram announced that the Brite Divinity School would be opening up registration to blacks, and Phillips-Felder said in a recent interview for the Brite History Project that she rushed home, grabbed her transcripts and went straight to the school that day.

“I didn’t really expect anything except for them to look at me funny,” she said. “But they were very cordial, and I walked out of there with a scholarship that carried me all the way through school.”

Professor Mark Toulouse, who interviewed Phillips-Felder for the history project, said she was an integral part of the school’s legacy.

“Brite’s history would not be complete without the stories of Phillips-Felder and [her classmate] James L. Claiborne, both of whom became the first black degree students at Brite Divinity School twelve years before TCU made the decision to integrate its student body,” Toulouse said.

Phillips-Felder is often remembered for arranging a visit from Martin Luther King Jr. in 1959 when he spoke to a crowd of more than 400 people at the old Majestic Theater in downtown Fort Worth, which was at that time a segregated establishment.

“His visit gave us courage,” Phillips-Felder told Star-Telegram columnist Bud Kennedy in 2002. “He taught us that we could stand up and do what was right – and do it in peace.”

Fort Worth Star-Telegram columnist and adjunct professor Bob Ray Sanders, who is working on a Calvin Littlejohn photography book documenting the Fort Worth black community, said Littlejohn’s archives contain several photographs of Phillips-Felder and King during his stay.

“She never talked about it a lot,” he said. “That’s just the kind of person she was. She met a young pastor, felt that the people of Fort Worth would benefit from his message, and she brought him here.”

Phillips-Felder went on to become founder and dean of the United Christian Leadership in the Lake Como area of Fort Worth, an organization that helped further the education of black church leaders.

Newell Williams, president of Brite and professor of modern and American church history, said Phillips-Felder paved the way not only for students who followed in her footsteps at Brite but for leadership in the black religious community in Fort Worth

“She truly is one of the real giants in the history of Brite,” Williams said. “She was a gutsy woman who dedicated her life to the church, and she genuinely cared about Christians both black and white.”