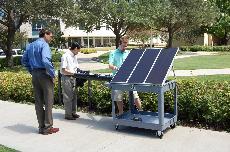 Keith Whitworth, professor of sociology, is known campuswide for the Purple Bike Program. His latest project revolves around the sun.

The carts can be wheeled outside to absorb sunlight through solar panels and power applications like a piano keyboard. The remaining energy is stored in a battery for when the cart is indoors or when there is no sunlight.

Diong, who has experience with fuel cell and wind turbine research, said he knew about Whitworth’s interest in sustainability from his work with the Purple Bike Program, which lends students a free bike for up to a semester.

So when there was an opportunity to apply for a $3,596 TCU Instructional Development grant offered to faculty to improve teaching methods or develop new courses, the two collaborated.

“He mentioned he taught this class on environmental sustainability, and students had to work on a project related to sustainability,” Diong said. “For this fall, we thought that we would have the students basically make use of what we call a solar-powered mobile unit, which is a set of solar panels mounted on a cart.”

The result is a new project for the class “Contemporary Topics: Social Justice And Environmental Sustainability Across the Global Economy” or “Sustainability is Sexy.” Whitworth said the 75 students in the class hope to demonstrate the power gathered from the sun using solar-powered carts at a football game against Stanford on Sept. 13. Whitworth said he is asking TCU Athletic Marketing for approval and to iron out the details. He said the carts will most likely power laptop computers signing up football fans for the TCU “Live Green Pledge,” a commitment to reduce their impact on the environment by pledging to recycle, buy locally-produced or organic food or join an environmental group on campus, among other activities.

Diong said senior engineering student Nathan Smith was responsible for building the carts with help from the engineering department staff. Diong said there are nine carts, each one having three silicon solar panels.

Whitworth said students will be divided into teams to think about ways in which the nine solar-powered carts can be utilized on campus.

“We can begin thinking about renewable energy on a small scale so eventually we might be able to implement something on a larger scale,” Whitworth said.

Diong said solar power doesn’t come without its constraints, however. He said the maximum power that can be generated by the three solar panels on each cart is only 45 watts, which is enough to fuel small electronics or low-power laptop computers. Diong said he is still determining the range of capability for these carts and remains optimistic about the future of solar power.

“We could make use of the rooftops on buildings to place panels and use that power to complement the grid power,” Diong said. “Since Texas has quite a lot of sunshine we should take advantage of it.”

In terms of approaching the administration about putting solar panels on buildings, Whitworth said he doesn’t have a formal plan, but he hopes this project will spark a conversation. Whitworth acknowledged that other colleges in Texas are utilizing alternative power sources like solar and wind energy.

The University of Texas at Austin and Texas A & M have participated in an international design contest in Washington, D.C., called the “Solar Decathlon” where teams from more than 20 universities build a solar-powered home. Diong said the students are not engineering majors and won’t enter the project into a competition, but he hopes the class will attract more students to the idea.

The “Sustainability is Sexy” class is available to all students as a sociology, criminal justice and anthropology credit without prerequisites.