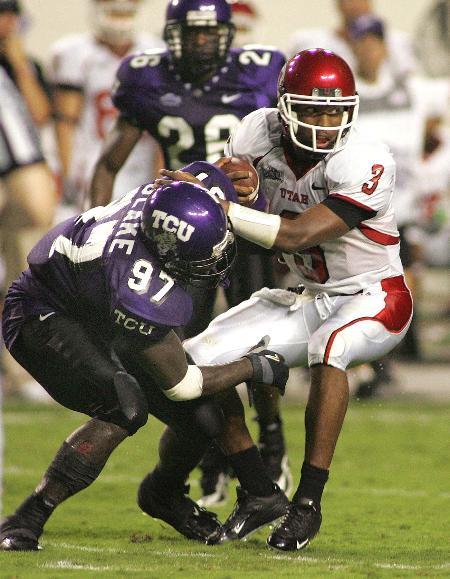 Before the season started, the Utah Utes expected to have their conference and Bowl Championship Series dreams tested in a late-season matchup. TCU, however, was not considered the primary threat to dash their hopes.

No. 12 TCU (9-1,6-0 MWC) goes into Thursday night’s game against undefeated University of Utah, No. 8 in the BCS, with the goal of achieving not only a conference championship but also, potentially, its first BCS berth in the school’s history.

“It’s everything you want,” head coach Gary Patterson said. “This is what you coach for, and it is exciting for our kids because the game is going to be played on a big stage.”

The Horned Frogs, fresh off a dominating 44-14 win over University of Nevada, Las Vegas, will be playing Utah in a hostile environment. Utah declared this game a Blackout Game before the season began, and the Frogs will have to beat the Utes, who have lost three home games since 2004, on their turf.

Patterson said the location of the game shouldn’t be a problem.

“It doesn’t matter whether you play at home or away,” Patterson said. “It’s just like a test in that if you prepare for it, there shouldn’t be anything that surprises you.”

The Utes are led on offense by senior quarterback Brian Johnson, who has passed for 1,820 yards and 14 touchdowns this season. But Utah also has a duo of capable running backs to take some of the pressure off the signal caller. Junior Matt Asiata and senior Darrell Mack have 996 yards and 12 touchdowns on the ground combined.

Patterson said Utah will try to neutralize TCU’s defensive speed by running straight at the players.

The Horned Frogs have made their mark on defense all season, and their game against the UNLV Rebels was no different. The Frogs held the Rebels to 175 total yards, including 67 in the passing game. But it is the Frogs’ offense that has started to find a groove, led by sophomore quarterback Andy Dalton.

Dalton has passed for 1,473 yards and nine touchdowns on the season, with all nine coming in the last three games. He has also rushed for 308 yards and six touchdowns. TCU leads the conference in allowing 10.8 points per game while averaging 36.6 points on offense.

Dalton said the team has continued to find ways to hunger for more.

“We still have something to prove,” he said. “We don’t get as much credit as we think we deserve. We lost to Utah last year, and that gives us more motivation.”

The winner of Thursday’s showdown will likely become the leading candidate to bust the BCS with an at-large bid. In order for that to happen, either team would have to finish ahead of undefeated Boise State University in the final BCS standings. Utah is currently two spots ahead of Boise State while TCU sits two spots behind the Broncos.

“If we win this ballgame, I think we should get an opportunity to play for something bigger,” Patterson said. “But that is for other people to decide. We just need to take care of business, and we have two more games to do that.”

Javan Hedlund, associate commissioner of communications for Mountain West, said this game is significant for the image of the conference.

“For the first time, two teams in the top 12 are playing for a Mountain West Conference title and potential BCS berth,” Hedlund said. “It’s good that the conference can showcase two top programs.”

Total DefenseTCU No. 2Utah No. 7