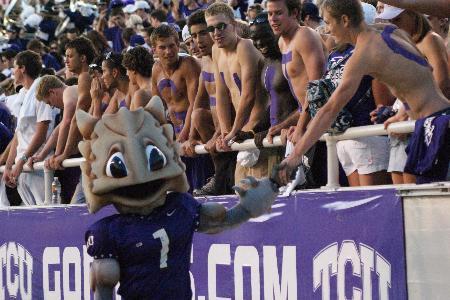 SuperFrog is one of twelve finalists for The Capital One All-America Mascot Challenge. He is currently in third place with 58,775 votes, even though the second place competitor, South Dakota State’s Jack Rabbit, has 56,583 votes, according to the Capital One BowlWeb site.

The University of Cincinnati’s Bearcat holds first place in the competition with 60,320 votes, according to the Web site.

Lindsay Shoulders, the university mascot coach said this is the first time SuperFrog was selected to compete in the competition.

Anyone can vote for SuperFrog once a day on CapitalOneBowl.com. Every Monday at 9 a.m. EST the votes are posted from the previous week.

To compete in the contest, the mascots had to be from an NCAA Football Bowl Subdivision or Football Championship Subdivision school with a football program. The schools had to fill out an application and submit a video and photo, Shoulders said.

The winner will receive $1,500 and go to the Capital One Bowl. Each week SuperFrog will compete against a different mascot. This week the mascot will face off against Louisiana State University’s Mike the Tiger.

The competition brought the university publicity, Shoulders said. Commercials with SuperFrog and the other competing mascots play on ESPN during college football games.

Scott Kull, associate director of athletics, said this is an unbelievable opportunity for both the university and SuperFrog.

Shoulders said what sets SuperFrog apart from other mascots is his originality.

“SuperFrog’s so unique as a mascot because it’s just something so different,” Shoulders said. “There (are) a lot of bearcats, a lot of cougars, horses, (but SuperFrog’s) definitely a very unique thing.”

SuperFrog, who can be found at various events including Cooks Children events, weddings, the SuperFrog Reading Challenge, and retirement parties, is very well rounded, Shoulders said.

Kull said SuperFrog appeals to fans of all ages.

“He’s got a cool character that really appeals to not only kids, but adults too,” Kull said.

“No other mascot can shoot blood out of it’s eyes,” Knipp said. “That’s why I know we’re going to win.”

After the eleventh week, the top eight mascots will advance to the tournament playoffs, which line up with the end of the regular football season.

Shoulders said the competition already opened the doors to some new opportunities for Superfrog.

SuperFrog weighs in at 215 pounds of ripped frog skin and his training regime is the Frog-leg press, according to the Capital One Bowl Web site. His pre-game meal is pizza with anchovies, worms and ants.

SuperFrog “draws strength from all 22 of his horns,” according to the Web site.