Football player might get feet wet on baseball diamond 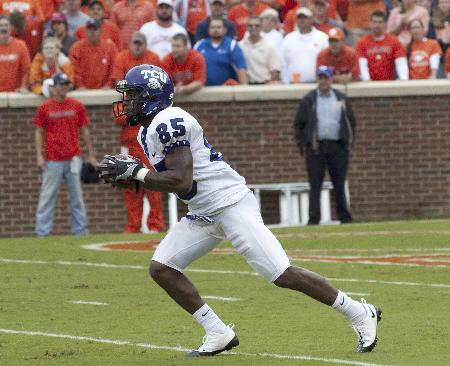 Frog head coach Gary Patterson knows exactly what kind of athlete he recruited in wide receiver Jeremy Kerley. Every time Kerley’s name is mentioned by the media, Patterson goes on to say how he was a 25-foot long jumper in high school and could throw a baseball 95 miles per hour on top of his football talent. Frog fans have witnessed his ability on the gridiron and, this spring, they might get to see what he is made of on the diamond.

“In Jeremy’s case, he’s given a lot to TCU,” Patterson said in his weekly press conference Tuesday. “If it all turns out he stays healthy, does well in the classroom and can help out coach Schlossnagle, then maybe we’ll talk about it.”

Kerley was a four-year letterman in football, baseball, track and field and basketball at Hutto High School in Hutto, Texas.

Patterson first brought up the possibility of Kerley playing two sports Saturday after the SMU game when asked how he felt about Kerley scoring a touchdown on a punt return.

“Let me tell you something, Jeremy Kerley is a special cat.” Patterson said. “He’s probably going to play for the baseball team this spring. He has a 95-mile-per-hour fastball and he’ll probably be an outfielder or a designated hitter or runner.”

Joining the Horned Frog baseball team will add to the schedule of a student-athlete who already has a lot on his plate. Kerley will have to balance school, baseball and spring football practice for the entire spring.

In recent history, TCU has had a set of brothers who played for both TCU football and baseball. Chad and Royce Huffman both played baseball and football for the Horned Frogs and are now both in the baseball minor leagues.