Hughes gives his all on and off the field 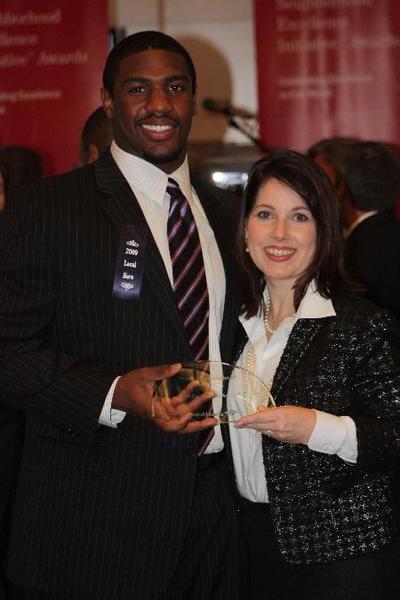 When Frog defensive end Jerry Hughes isn’t busy sacking Division I quarterbacks, he is taking on the challenges of being a role model to the children of Fort Worth. For Hughes, however, this job isn’t restricted to just the football field, but includes the playground as well.

Hughes was honored Thursday at the Bank of America 2009 Neighborhood Excellence Initiative Awards as a Local Hero of Tarrant County at Cowboys Stadium. The awards celebrate those making a difference in the communities Bank of America serves. Each Local Hero was honored with a $5,000 grant, which could be donated to an eligible nonprofit of his or her choice, for serving Tarrant County neighborhoods. Hughes donated his grant to the Texas Christian University Foundation.

“It’s a great honor for the school as well for me to be recognized for some of the work that I’m doing throughout the community,” Hughes said.

Hughes got started working with the organization Fortress Youth Development Center in summer of 2008 through Le Ann Roberts’ service learning program in the College of Communication, he said.

Roberts said Hughes, along with the other students in the program, put on a sports camp with incorporated leadership lessons that summer. Without supplies or a budget, the university students put on a camp based on their skills or abilities.

“One of the interesting things about Jerry is he was nervous working with the kids,” Roberts said. “I told him you know what, you’re going to get out there and give back because you have a lot of gifts and talents and you’ve had a lot of opportunity and this is a great opportunity you can be a positive role model in the community.”

After working the camp, Hughes came back to Fortress to volunteer with the children. After several months of volunteering, Hughes took on the role as a mentor, Roberts said.

“Fortress called him and said, ‘We have a young man who is having a lot of difficulty in school. He’s fighting with his teachers and fighting with his peers.’ So they called Jerry and asked him if he’d go for a visit,” Roberts said.

Hughes did go for that visit and had the child promise he would stay out of trouble for three weeks. In return, Hughes would come visit him again, Roberts said. The promise did the trick.

“The kid stayed out of trouble for three weeks which was a remarkable feat for that young child to do that,” Roberts said.

Hughes said, “It’s great to see them change over time and the fact that we as college students can actually have an impact on a young person’s life.”

But his service doesn’t stop there. Last year, before the annual Texas Assessment of Knowledge and Skills test, Hughes gathered a group of students from TCU and some different members of the athletic department, including former athletics director Danny Morrison, and held a pep rally for the students of an elementary school that feeds into Fortress.

Even though he might hang up his pads after the game, Hughes knows his role as a positive role model is not over, Roberts said.

“He’s a good role model for his peers here on campus,” Roberts said. “I had a student in my office the other day and saw a picture of him here and said, ‘You know what, he says my name wherever I am on campus. He stops to say hello to me.’ That’s the kind of person Jerry is. He’s a solid, steady, constant person.”