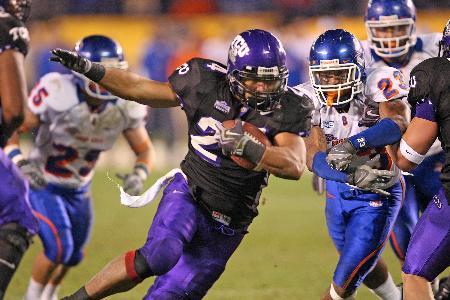 Q&A with Tony Alba, director of media relations for the Fiesta Bowl

Q: What made you decide to choose the TCU-Boise State matchup?

A: “The selection order determined part of it. We had the second choice overall as a replacement for Texas when we lost the Big 12 champion into the BCS championship game. The Sugar Bowl had the first pick to replace Alabama, and they chose Florida. At that point, looking at the options, we just felt it was difficult to overlook and bypass a very highly ranked and very exciting team that was undefeated. We decided to go with TCU as our first selection because they are so highly ranked and undefeated and arguably (have) a claim to the national championship should they happen to win. The Orange Bowl followed up with Iowa. Basically our selections came down to Boise State and Cincinnati. It really came down to a matter of proximity, and Boise State is a about a thousand miles closer to us than Cincinnati. Based on that and giving the largest number of fans the best opportunity to travel with the team, we decided that selection made the most sense to us. That’s basically how it unfolded.”

Q: Have you had any backlash with the selection?

A: “There’s some fans that have expressed frustration and that’s to be expected. We’ve heard from some fans from Iowa that really wanted to come out here. We’ve heard from some fans with the two competing institutions that are saying “we deserve better.” I’m not sure I understand and follow their thinking in terms of saying ‘we deserve to play somebody better.’ Part of our thinking is that we have a great match up. TCU and Boise State have proven themselves. They’ve proven themselves on the field. They’ve proven themselves all year long. To me when you say “we deserve a chance to play a better opponent,” that’s a disservice to your own teams if you ask me. You are the very best out there. We’re thrilled with the matchup. I think once people get over whatever misdirected anger they have, I think they’ll realize that ‘we’re right we belong, we’re playing one of the best teams in the country,’ and I think fans on both side can say that. We’re looking forward to it.”

Q: Do you think most of that reaction is because TCU and Boise State played in last year’s Poinsettia Bowl?

A: “I don’t know. It’s a different year and a different team. I don’t know where that’s coming from. I think a lot of people are thinking ‘Hey, we want a chance to play one of the big guys…’ You are the big guys. You’re undefeated and in the top six in the country. When you’re making that sort of criticism about this match up, you’re criticizing yourself.

Q: Was geography the main reason you chose Boise State over Cincinnati even though Cincinnati is ranked higher?

A: Absolutely. It was a case where we had a tough call to make. Boise traveled extremely well when they were here in 2007 and it’s half as far as Cincinnati. That really was the determining factor in making that selection.”

Q: Is the negative reaction going to draw more attention to the game?

A: “Who knows? We’ve also had a lot of support out there. We’ve had some writers that have written that we have the best match up of all the bowl games including the national championship game. I think we’ve got an extremely attractive game. Whether it all dies down or whether it adds to the attention of the game, at this point that’s not something we’re worried about.”