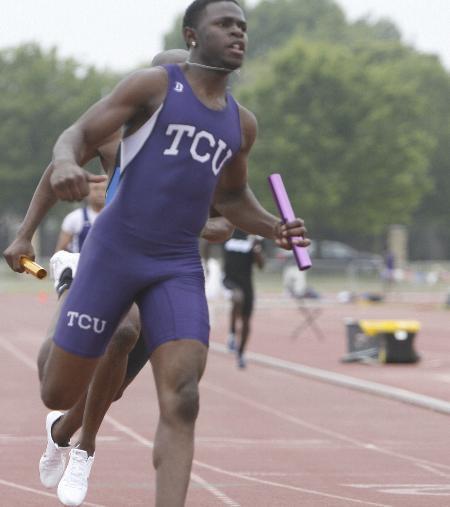 TCU leads with a number of strong competitors this season. Freshman Charles Silmon ran a 10.34 in the men’s 100-meter at the Texas Relays, the fastest time for the Mountain West Conference in the event this season and the 12th fastest time in the NCAA. Silmon also heads up the men’s 4×100 relay along with sophomore Skye Dawson, junior Mychal Dungey and sophomore Mark Barnes. Barnes clocked a time of 39.20 at the Relays, the third fastest time recorded in the NCAA this season and the seventh fastest time in the world. Silmon was awarded the MWC Men’s Outdoor Track and Field Athlete of the Week.

Three-time All-American senior Neidra Covington leads the women’s side at the triple-jump, boasting a season best jump of 42-feet-7.5-inches, good enough for seventh in the NCAA this spring. The Horned Frogs also have a top-25 thrower in the shot put with junior Stormy Harrison and her season best of 49-feet-10.5-inches.

The Horned Frogs have a week off leading up to the TCU Invitational and will look to improve upon their success this season. This weekend’s meet is the second of two home events for the Horned Frogs. The Horned Frog Invitational took place in Fort Worth on March 19, and TCU came away with 12 first-place finishes with an outstanding performance by sophomore Whitney Gipson in the women’s long jump and senior Tommy Killen in the men’s discus. Gipson took first place with her very first attempt in the meet. Killen threw a personal best of 178-feet-9-inches, earning third place.

The meet starts Friday at the Lowden Track Complex on campus.

Where: Fort Worth, Texas