Graduate stands out for job among 150 applicants 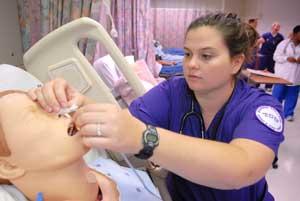 Within one week, Kate Lunati went from having no interviews and no phone calls to having a job as a trauma Intensive Care Unit nurse at Texas Health Harris Methodist Hospital Fort Worth.

Lunati got the call from the hospital on March 19.

“I stopped breathing; I was so excited,” said Lunati, a senior nursing major. “So much stress was just gone.”

Lunati was chosen from 150 applicants for a position and said she only interviewed once to get the job she wanted.

“It only takes one,” Lunati said.

Lunati said she had more interviews lined up for other nursing positions but cancelled them when a manager from Harris Methodist told her the job was hers.

Lunati said she considered moving back home to Atlanta, Ga., before she got the position in Fort Worth, but decided to apply at hospitals in Fort Worth because the hospitals are more familiar with the university and its nursing program. She also had faculty support from the Harris College of Nursing and Health Sciences if she stayed in North Texas, she said.

Lunati said she decided she wanted to become a nurse just before she left for college. As a camp counselor, she cared for a girl who had a severe asthma attack, which contributed to her decision to enter the health care field.

Lunati said she chose to attend the university because the University of Georgia does not have a nursing program.

“Luckily I’d applied to a school with a great nursing program,” Lunati said.

Maggie Lamberth, a senior early childhood education major, said she was concerned that Lunati would move back to Atlanta. Lamberth has known Lunati since their freshman year as members of Chi Omega. She said Lunati’s diligence and dedication to nursing got her the position.

“She’s one of the hardest workers that we know,” Lamberth said.

Sharon Canclini, a clinical instructor for Harris College, said she was not surprised Lunati was hired from the pool of applicants. She said Lunati worked hard during her time at the university and it paid off.

She said she thinks Lunati was hired because she was more mature than many students her age.

“She’s quietly confident,” Canclini said. “She’s not one of those students who’s flamboyant. She’s more contemplative. She thinks things through.”

Canclini said Lunati had many qualities that would serve her well in a career as a nurse including her gentle nature, passion and steady demeanor.

Lunati’s calm would allow her to process and assess situations more easily and quickly than those who were easily flustered, Canclini said.

“I think that’s what makes a good nurse is the ability to filter through all the inputs and pick out the things that are most important,” Canclini said. “And Kate’s pretty good at that.”

She said she knows when a student is ready to enter the field when she would trust them to care for those close to her.

“I would let her care for me, and my children and my mother without hesitation,” Canclini said.