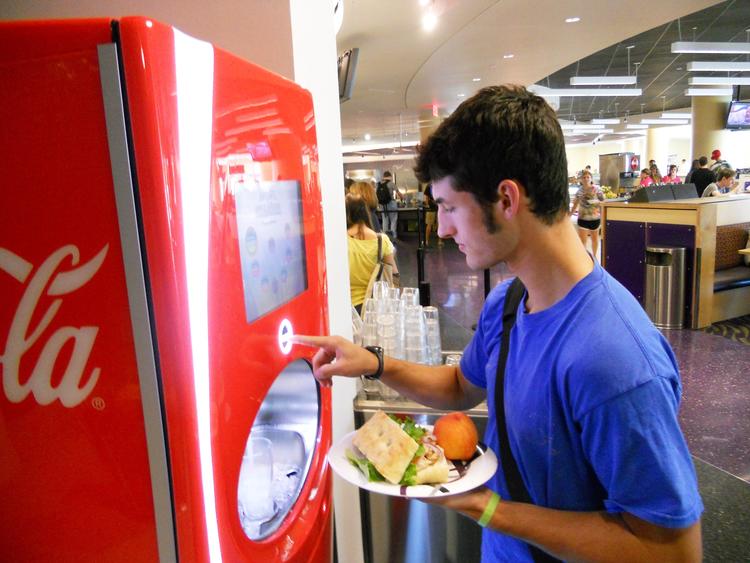 Heralded by Popular Science Magazine as “the most advanced soda fountain ever,” new Coca-Cola Freestyle fountains have been met with rave reviews from students on campus.

The Freestyle fountains, located in 1873 and Market Square, and offer 106 individual flavors, with the possibility for endless combinations. They machines are creating a stir not only with technology magazines, but also with university students.

The machine uses a touchscreen interface that first displays brands the user can choose from. After selecting a brand, a variety of flavors appear, and one simply selects their flavor of choice, presses “pour” and voilÃÂ , the selection flows into the cup.

Director Of Operations for TCU Dining Services Yves Duguay said the response from students was crazy.

“It’s like sliced bread all over again,” Duguaysaid. “[Their response] was fanatic.”

The Freestyle works differently than other soda machines in Market Square. Duguay said it was more efficient because it did not require hoses, bags and connections like typical soda fountains. Instead, Duguay said, the machine was self-contained.

The Freestyle is currently in the pilot testing stage with Coca-Cola, and Duguay said the university is the first campus that uses Sodexo to have these machines. He also said there was a great probability that they will become permanent, dependent upon surveys done by Coca-Cola.

Sophomore pre-major Drew Stone said he loved the new machines and that the only bad thing about them was long lines.

According to an article by Fast Company Magazine, Freestyle machines use “PurePour” technology to mix flavors. PurePour was originally developed to measure precise amounts of dialysis and cancer drugs.

According Popular Science Magazine, the new machine can also upload data such as beverage consumption and peak times to Coca-Cola for market research.

According to the Fast Company article, Coca-Cola can also “talk back to the machine,” causing it to stop serving a specific drink immediately in case of recall or discontinuance.

With all of the publicity and accolades the machines received, Beatty summed up his description of them with two words.