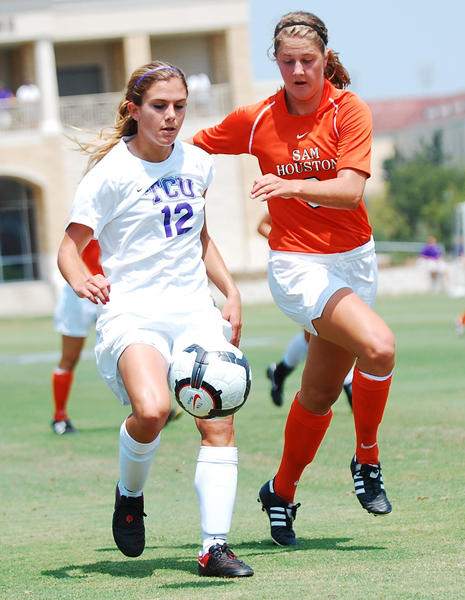 “Our defenders have done a great job this season,” she said. “Offensively, we need to find a rhythm and that comes from playing more together.”

Head Coach Dan Abdalla said he thought, with so many new players in the lineup, the outcome of the game would come down to how the team plays offensively.

“We’re just trying to get better every game and really start to find a rhythm offensively,” he said. “I think for us it’s going to be a matter of “Can we keep getting better with our movement up top and our chemistry in the final third?'”

Abdalla said he expects Friday’s match against the in-state rival Cougars to be a “wide-open” game.

“It’s always been a one-goal game either way,” he said. “We expect both teams will come out excited to play.”

TCU (2-2-0) goes into Friday’ game after taking an early lead in a match against Sam Houston State last Sunday.

The Frogs stayed ahead the entire game, with more than seven-times more shots on goal, in a 6-0 victory.

Senior midfielder Jackie Torda said she wanted to build off efforts from last weekend’s competition for the upcoming games.

“We want to come out sharp in the first half, set the tempo and pace for the game and then continue that work rate for a full 90 minutes,” she said.

As for the season, Torda said she thought the Horned Frogs should improve their game.

“As long as we come out, play our game and continue to work for each other we should be able to accomplish our goal and bring home some wins,” she said.

Last Friday, TCU lost 1-0 to the University of Southern California Trojans in front of 2,318 fans, the second largest crowd in Garvey-Rosenthal Stadium history.

With another Friday night home game this week, Abdalla said he expects there to be a great crowd for the match against the Houston Cougars (4-0-0) .

“Hopefully we can get as many students out there as possible to make as much of a home field advantage as possible,” he said.

TCU vs. University of Houston