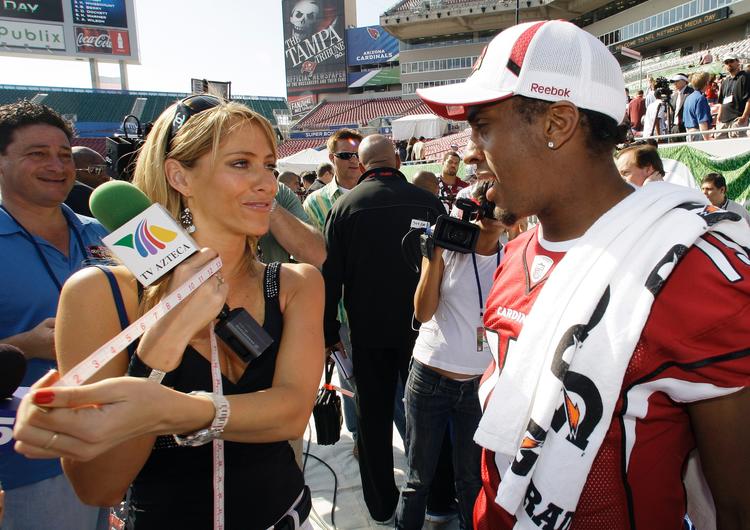 Unless you’ve been living under a rock for the past few days, you have probably heard about the controversy surrounding Ines Sainz, a female sports reporter for Mexico’s Azteca television network. Last Saturday, Sainz entered the New York Jets locker room before their season opener against the Baltimore Ravens and waited to interview Jets quarterback Mark Sanchez. While waiting, she was the subject of catcalls, jokes and lewd remarks from some of the players, largely because of her attire 8212; tight-fitting jeans and a tight white blouse.

Sainz then tweeted, “I’m so uncomfortable. I’m in the locker room waiting for Mark Sanchez trying not to make eye contact.”

Jets officials and players that witnessed the inappropriate behavior later apologized. Team owner Woody Johnson personally phoned Sainz and told her that he would look into the incident. An NFL probe followed, and as of this writing, no one has been reprimanded.

A former Miss Universe contestant, Sainz obviously has no problem being in the public eye because of her looks. However, when her reputation as a sex symbol clashes with her reputation as a professional sports reporter, it is a given that incidents like this will happen.

Maybe if she had dressed a little bit more conservatively, she would not have felt “uncomfortable.” The problem is not that she was a woman reporter in a men’s locker room, the problem is that she was an unprofessionally dressed woman reporter in a men’s locker room. Since the incident, Sainz has given numerous interviews about her experience, and her attire in those interviews is similar to her attire in the locker room. In one interview, Sainz was dressed in a low-cut black minidress. She looks like she’s about to go clubbing, not to work as a reporter. When asked during the interview if she thought that the way she dressed was out of line, she defended it as appropriate.

Sainz should be allowed to go into men’s locker rooms. She’s a sports reporter; it’s her job to go into locker rooms. But when she bills herself as “the hottest Mexican sports reporter,” she has to assume that she will be treated as such, especially when she walks into a male-dominated environment. Sainz’s reputation doesn’t make the harassment that she faced any less wrong, but it does provide an explanation for why it happened. Any female sports reporter these days is going to be the subject of scrutiny because of her looks. That’s the nature of the media today. Any woman in a male-dominated job will be judged based on appearances. This is a sad but true fact. If the media had not already placed Sainz on a pedestal because of her looks, this incident would not have happened.

However, Sainz was harassed because she stepped into a men’s locker room dressed like a sex symbol, and if she didn’t think that anything would come of it, she should have been smarter.