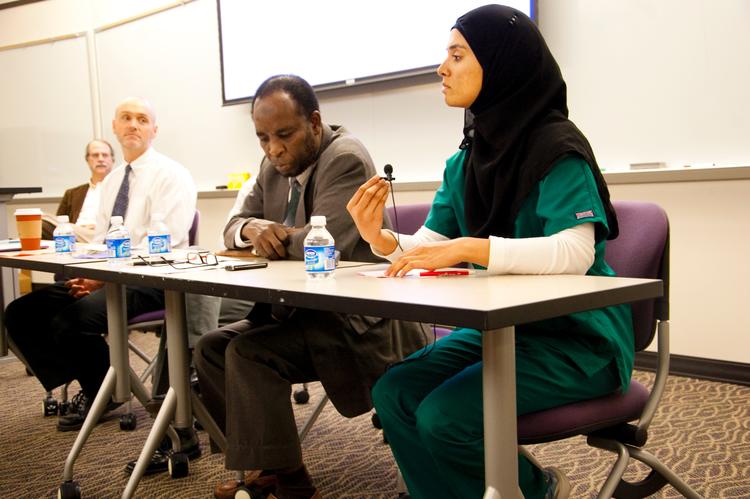 The heated commentary of two women from the Fort Worth community at the “Who’s Afraid of Muslims?” public forum Thursday helped to humanize Muslims for students in attendance, a university professor said.

The two female audience members stood up during the discussion period and raised questions about Islamic law in the U.S. One woman, who said she was a TCU alumna, held a stack of papers in the air and said she could cite a modern Muslim scholar who taught that Islamic law was not compatible with democracy.

Andy Fort, a professor of religion and the event moderator, said the latter woman’s dissenting, minority view was a perfect example of how a person has taken an abstract position without listening to human beings.

Alex Cutler, a senior religion and anthropology double major and president of TCU Interfaith Community, said he would have liked to engage in conversation with the two women.

The forum took place in front of a nearly-full audience made up mostly of students and some community members. Cutler said he thought it was a “phenomenal” turnout.

Fort welcomed the audience and introduced the panel, made up of three religion professors and one Muslim TCU alumna. Each member of the panel spoke for about 10 minutes about different aspects of Islam.

Mark Dennis, assistant professor of religion, spoke about violence in religion and the misrepresentation of facts that could affect non-Muslim Americans’ views of Islam.

During this portion, Yushau Sodiq, an associate professor of religion, dispelled myths and stated little-known facts about the religion in America. For example, Sodiq said only 18 percent of Muslims in the world are Arab. In fact, he said, the majority of Muslims in America are African-American.

Later, Sage Elwell, assistant professor of religion, spoke about recent controversies surrounding depictions of the prophet Muhammad, who is traditionally not pictured in Islamic art to prevent idolization.

Finally, Yasmine Javeed, a TCU alumna who practices Islam, spoke about what it is like to be Muslim today and how she faces misinformed opinions of her faith.

After each of the panel members spoke, the floor was opened for a discussion moderated by Fort, during which several students stood and asked questions.

Fort said he thought the participation of the speakers helped humanize the sometimes-misunderstood religion.

“What I wanted to do was put a human face on Islam,” Fort said. “I really think that happened.”