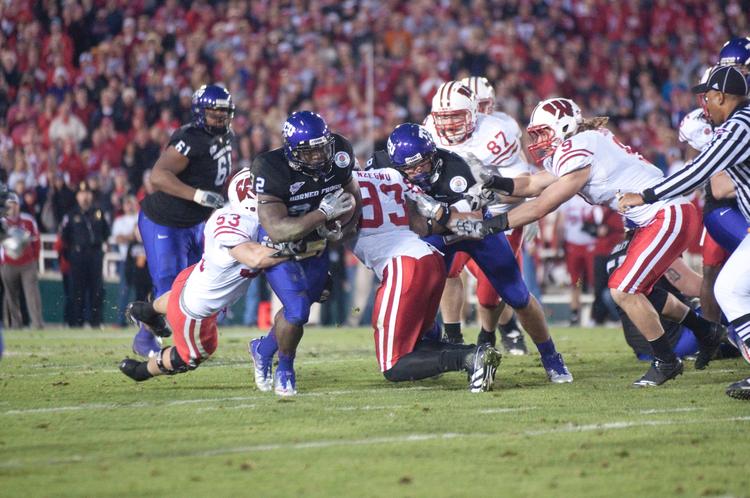 Third ranked TCU defeated No. 4 Wisconsin 21-19, the closest game the Frogs had all season, in Pasadena at the 97thRose Bowl Game.

TCU head football coach Gary Patterson was very humble that the Frogs had the chance to play in the “Granddaddy of them all”, but also with a win.

“We won 21-19, but we’re very humble in this situation and understand it took a lot of people to get us to this point,” Patterson said.

“I can’t even, it’s hard for me to believe we even got an opportunity to play in the Rose Bowl let alone say we’re the Rose Bowl champs,” Patterson said.

Wisconsin head coach Bret Bielema said TCU is a very good football team, and they played very well in all phases of the game. He said the Frogs proved they are undefeated for a reason.

“I don’t think they’re a Cinderella story cause they proved it,” Bielema said.

Dalton believed that the Frogs win against Wisconsin showed non-AQ teams can play with anybody.

“I think to win the Rose Bowl means just a tremendous thing for this program,” Dalton said. “I think we showed that these teams can play with anybody.”

The Frogs and the Badgers set the highest first quarter scoring record in Rose Bowl History with 24 points scored. The last record was 17 points scored by Michigan vs. Washington in the 1993 Rose Bowl.

Wisconsin started the game with a lead early in the first quarter with a 30 yard field goal by Phillip Welch.

The Horned Frog offense came out after Wisconsin’s field goal with power and drove the ball into the end zone. Quarterback Andy Dalton connected with wide receiver Bart Johnson to score the Frogs first touchdown of the game, bringing the lead to the Frogs for the first time in the game.

The game continued to turn over the lead after the Badgers scored a touchdown to regain the lead late in the first quarter. Running back John Clay rushed for 1 yard to score the Badgers first touchdown of the game.

Dalton said the constant changing of lead at the beginning of the game just felt like the Frog offense was watching the Badgers on the field the whole time. Dalton said you always want to start the game fast, and constant scoring was part of that mentality.

With a majority 94,118 fans in the crowd cheering for the Badgers, the sound of Horned Frog fans overtook the stadium, giving the Frogs more energy the louder the stadium got.

Energy kept rising in the Rose Bowl from TCU fans after a 44 yard reception from Dalton to freshman Josh Boyce, bringing the Frogs into the Red Zone. The Frogs used the momentum gained from Dalton’s pass to score their second touchdown of the game, with a run by Dalton.

The first half ended with a field goal by Wisconsin to bring the Frogs lead to only one point at halftime. The Frogs went into halftime leading Wisconsin 14-13, which fit into TCU head coach Gary Patterson’s “one-point” theory, where one-point is all that makes a difference in a game.

The Frog offense came out after halftime with strong energy, scoring a touchdown on their first drive of the second half. The touchdown was scored was scored with a 1-yard run by junior Luke Shivers.

During the third quarter junior line back Tank Carder snuck up on Wisconsin quarterback Scott Tolzien for the sack. Carder also had a total of six tackles during the game.

Both the Badger and Horned Frog defense held each other from gaining many points in the second half. Defensive efforts for the Frogs were led by TCU defensive player Tejay Johnson who totaled 10 tackles, six of which were individual hits. Colin Jones also had a total of 10 tackles and eight were individual hits.

The Badgers brought the game back to a one point difference with only 2:00 left in the game with a touchdown. Wisconsin went for the 2-point conversion and junior Carder blocked the Badgers from bringing the game to a tie. The two point conversion, which could have pulled the game into overtime, was the seal for the Frogs win.

Patterson said he was not surprised the Badgers called to throw the ball instead of running it, like they had most of the game.

“They call plays, and I call defenses,” Patterson said. “It’s one of those situations where I’m sure they had a play in mind that… was going to work.”

Carder said he did not realize how big the block was until a few minutes after the play, when he realized that was the deciding factor in the game.

“After I blocked it down it didn’t seem like that big of a play until it sunk in… they needed two points,” Carder said.