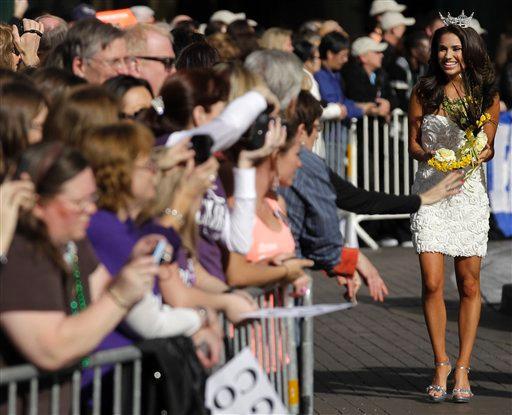 Senior broadcast journalism major Ashley Melnick was one of eight contestants chosen by the judges to remain in the top 12 ofSaturday’s Miss America Pageant.

And in a first-ever twist for the contest, the young women picked two finalists themselves, Miss Kentucky Djuan Trent and Miss Oregon Stephenie Denise Steers.

She won a $50,000 scholarship and a year’s reign in one of the most visible positions any young woman could seek.

Scanlan beat out 52 beauty queens from other U.S. states, plus Puerto Rico, the Virgin Islands and the District of Columbia. She said she was a bit worried after a preliminary interview with judges and hoped they would think a 17-year-old could do the job.

“I want to be there making sure that I stand up for what’s right, stand up for integrity and honesty,” Teresa Scanlan told The Associated Press on Saturday night after becoming the first Miss America from the Cornhusker State.

“And I never passed up a cookie on my journey here,” Scanlan said.

She’s the youngest Miss America since the pageant implemented age limits in 1938. Rosemary LaPlanche was runner-up in 1940 and easily won the crown in 1941 despite being one month too young to compete, according to the pageant’s website.

Scanlan said age didn’t matter as the pageant celebrated its 90th birthday, though she thought her age might have made her an underdog.

“We were on an even playing field,” she said. “From 17 to 24, that can be a huge age range. But with these girls, they are all at the highest level imaginable.”

Scanlan, a recent high school graduate from the western Nebraska town of Gering, planned to study American politics at Patrick Henry College in Virginia after her reign as Miss America. Scanlan said she planned to defer her university enrollment until she finishes her reign with the crown.

During the nationally televised pageant, Scanlan answered a question about Wikileaks by saying the United States should focus on security first.

“You know when it came to that situation, it was actually based on espionage, and when it comes to the security of our nation, we have to focus on security first and then people’s right to know, because it’s so important that everybody who’s in our borders is safe and so we can’t let things like that happen, and they must be handled properly,” she said.

Scanlan said the question was easier for her than a generic one, because she has routinely discussed current events with her family since she was young.

The contestants 8212; from every state plus the District of Columbia, the Virgin Islands and Puerto Rico 8212; started the show by dancing up the aisles while wearing silver cocktail dresses.

A panel of seven judges eyed them for looks and fitness. The competition included evening gown, talent and interview portions, with eliminations for 15 finalists, then 12, then 10, five and finally the winner along the way.

In her introduction to the audience, Bulkley dedicated her performance to U.S. Rep. Gabrielle Giffords, who was shot in the head last week in Tucson. Bulkley called Giffords her mentor.

The Miss America Organization bills itself as the country’s largest scholarship provider for women, with $349,000 in prizes given this year at the national level.