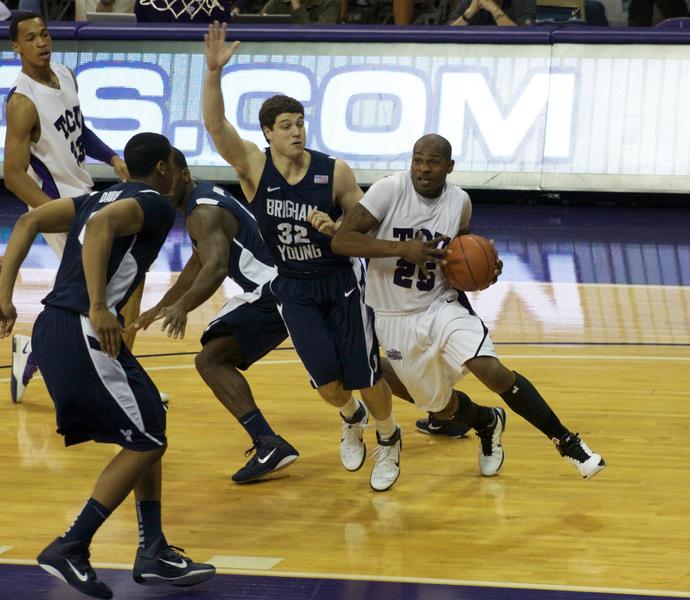 The TCU men’s basketball team will travel to Salt Lake City in an attempt to earn its first win since Jan. 12. Tipoff is set for 9 p.m. Tuesday at Utah’s Huntsman Center.

A victory would end the Horned Frogs’ 10-game drought and help them escape from finishing last in the Mountain West Conference.

The only other Frog in double-digit figures was sophomore forward Garlon Green, who chipped in 10 points. Green leads all active Frog players with 11.6 points per game. Junior guard Hank Thorns also contributed with seven rebounds and 12 assists in the loss.

Cougars’ senior guard Jimmer Fredette scored a game-high 23 points on 6-of-16 shooting. His scoring total for Saturday’s game was more than four points below his season average of 27.2 points per game.

Defensively, the Frogs held BYU to 36 percent shooting in the second half and forced 10 turnovers in the game. However, the 17-point first-half deficit was too much for the Frogs to overcome.

“We’re trying to get over the hump,” Thorns said in a TCU Athletics release. “It’s hard, but that’s what we’re looking for. We need that one win, and I think we’ll get a couple from there.”

The Frogs lost their last basketball contest against the Utes on Jan. 22 in a 75-62 decision. The game was the third loss in their current the 10-game losing streak.

The Frogs are also on an nine-game road losing streak.

Thorns leads the Mountain West in assists with 6.7 per game.

Utah’s leading scorer, junior guard Will Clyburn, may not play due to a bruised heel. He is second in the Mountain West in both scoring and rebounding.