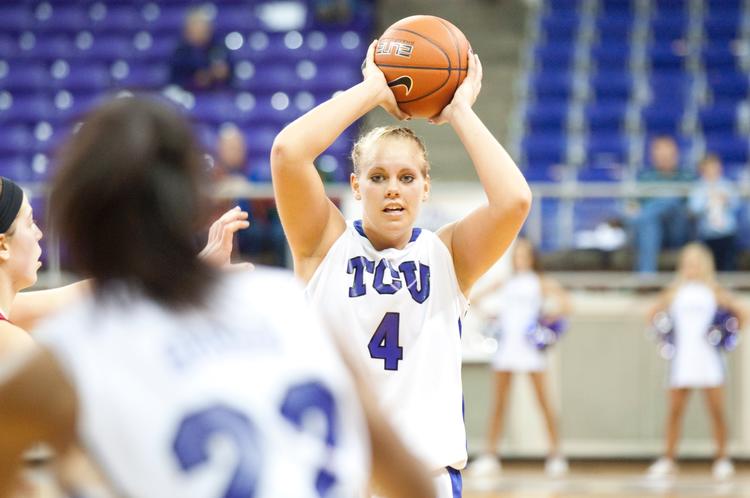 TCU finished a season sweep of Utah with a 71-60 victory, while shooting 50.9 percent from the field and 53.3 percent from the three-point line. Senior guard/forward Helena Sverrisdottir led all scorers with 23 points and added six assists while Utes’ sophomore guard Iwalani Rodrigues led Utah with 19 points.

Utah jumped out to an early 7-4 lead, but TCU quickly erased the deficit. Sverrisdottir led the charge, hitting back-to-back 3-pointers, a lay-up and another three to take the lead for TCU.

Plouffe hit a pair of baskets and a couple free throws to keep the Utes in the game. Utah tied the game mid-way through the half at 23-23.

Crawford completed a three-point play to take back the lead for TCU at the eight minute mark. The Lady Frogs then went on a 10-0 run to take a 35-25 lead. Five Lady Frogs scored during the run, led by four points from senior center Micah Garoutte. Utah missed a transition lay-up but scored on the ensuing rebound to end the TCU run.

Plouffe picked up an offensive foul, giving Crawford time to tack on an additional two points right before the half to give the Lady Frogs a 39-27 halftime lead.

“That was the best half of offensive basketball since the Oklahoma game,” head basketball coach Jeff Mittie said.

Utah tried to chip away TCU’s lead, but the Frogs answered every basket put up by the Utes. Both teams went on a scoring drought at the 15:38 mark but Sverrisdottir’s 3-pointer at the 13 minute mark broke the drought and extended the Frogs lead to 16 points.

TCU kept the lead with contributions off the bench, including baskets from senior forward Rachel Rentschler and freshman center Latricia Lovings.

But the Utes didn’t go away. Rodrigues hit a trio of threes to keep the Utes in the game, cutting the TCU lead to 62-55 at the 2:46 mark.

The Frogs defense was tested down the stretch, but Mittie said he knew TCU would be able to overcome the comeback by Utah.

“We are gonna have a few breakdowns here and there…but we are also gonna get the advantage of playing mixed defenses as well,” Mittie said. “I think the difference is we were able to go to multiple defenses at different times where they pretty much just played one.”

Carter extended the Frogs lead to 65-58 with a shot from beyond the arc, but Rodrigues kept attacking the Frogs as she turned a steal into two points for the Utes.

Utah started to foul the frogs with 1:30 left to try to lengthen the game. Sverrisdottir stepped up to hit free throws to seal the game.

The Frogs showed their versatility as a team and their ability to move the ball around which is something they have been working on, Mittie said. Yesterday in practice, six different TCU players touched the ball in the paint offensively in a six minute span.

“That is what we need to become,” Mittie said. “You saw us tonight. We were able to get those types of touches.”

Added Sverrisdottir: “We know we can be a good team. It’s almost March and we should know for sure.”

The Frogs will play their last conference road game of the 2010-11 season at New Mexico Saturday. Tip-off is set for 3 p.m.