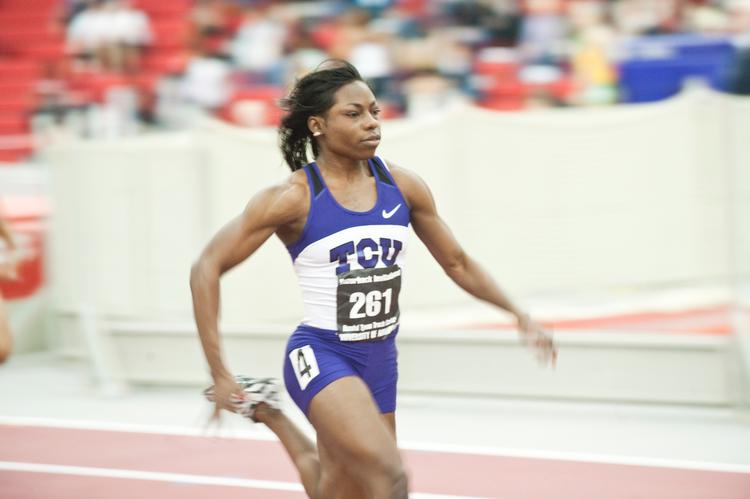 Senior sprinter Jessica Young said she is doing what she envisioned this year on the track.

Young is now listed as the second fastest female collegiate runner in the country after her performance at the Mountain West Indoor Championships at the end of February.

Young said she doesn’t focus on breaking records when she prepares for a meet.

“I am more mentally prepared to win the race that I’m running, and breaking records is something that comes along with that,” Young said. “I try not to chase times or records.”

Young’s accomplishments this year come after taking the entire 2010 season off from competition. The break was necessary for resting her body after a taxing 2009 season, she said.

“Most of that time was spent not doing too much, just stretching out and getting on a treadmill, doing stuff off the track and not doing a lot of work with my body,” Young said.

Young transferred to TCU from the University of Richmond for her sophomore season. She redshirted in 2008 and returned to action as a Frog in 2009. Her 2009 campaign was a decorated one, with several honors including a second place finish in the 100-meters at the NCAA Championships.

After her 2009 season, Young was selected as an alternate for Team USA at the IAAF World Championships in Berlin. She said that experience helped her a lot in developing into the sprinter she is now.

“It was a great experience,” Young said. “It was great being close to professionals, watching them prepare and seeing what they do.”

Young has plans to return to Team USA after graduation, and said she will try out for the Olympics.

“My goal is to go to the next level with track & field,” she said. “I definitely love running and I love the sport so that’s what I’m going to do.”

Young said she hasn’t made up her mind on graduate school. She said she plans to focus on the Olympics and possibly take a year off from school, but is definitely going to attend graduate school.

The next Olympics will take place in London in 2012.

The NCAA Indoor Championships are this weekend in College Station. Young said she is trying not to put too much pressure on herself going into the championships.

“I’m just trying to relax and go into it with a clear head thinking that I’m just going to have fun and run fast,” Young said.

Young had a chance to be a national champion two years ago, and ended up earning a second place finish.

Young will compete in the 60-meter, the 200-meter and will be a member of the 4×100 relay team at the championships this weekend.