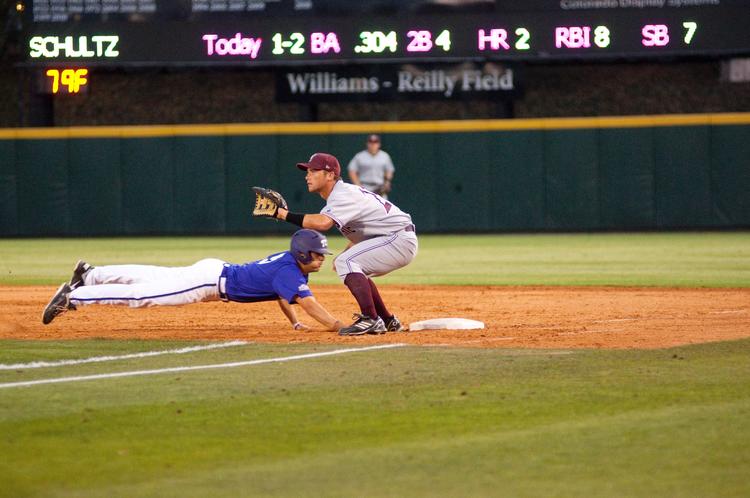 Head baseball coach Jim Schlossnagle said he never doubted his teams attitude or effort, but a win over the Texas State Bobcats Tuesday evening may have taken some of the steam out of his doubts regarding No. 14 TCU’s situational intelligence and execution going into TCU’s weekend series.

The Cougars travel to Fort Worth with a few familiar faces, most notably Todd Whitting, who left TCU as associate head coach just months ago to become Houston’s head coach. Also, Houston assistant coach Steven Trout played at TCU in 2006-07, and assistant coach Jack Cressend pitched for Schlossnagle at Tulane.

“It’s going to be a little bit of an old home week,” Schlossnagle said. “It’s not something I particularly enjoy because I don’t enjoy competing with people I’m close to. I know how losing feels, and I certainly don’t wish that on people I consider close personal friends. We hope they have a great time, but we hope the Horned Frogs can come out with a few wins.”

With the Frogs in the midst of a 13-game homestand, the crowd could prove to be a factor this weekend at Lupton Stadium. TCU ranks ninth nationally in attendance, averaging 4,399 fans per game, while the Cougars play to an average crowd, home and away, of 1,983.

On Tuesday night against Texas State, the Frogs looked like they might not get the win as they trailed 1-0 after six innings. TCU eventually beat the Bobcats 3-1, with all three runs coming in the bottom of the seventh inning.

Schlossnagle said on Tuesday that he didn’t feel the Frogs necessarily played poorly in the games they’ve lost but that things haven’t been going their way in the first few weeks of the season.

“The game of baseball has been kicking our rear ends,” Schlossnagle said. “We’ve pitched lights-out, we’ve played good defense, and normally when you do those things, you win. Hopefully, throughout the course of the season, we’ll catch up to where our record should be.”

In a broad sense that surely applies more broadly than baseball, Schlossnagle often says that the only two things the team can control is its effort and attitude. Despite the beginning of the season not going quite like the pre-season No. 1 and No. 2 rankings would indicate, he hasn’t seen an absence of these key ingredients to success.

Fridays’s game with the Cougars will be the 97th time the programs have met.

TCU holds a 10-3 series advantage since Schlossnagle took over the program.

The Frogs have won four straight against the Cougars.