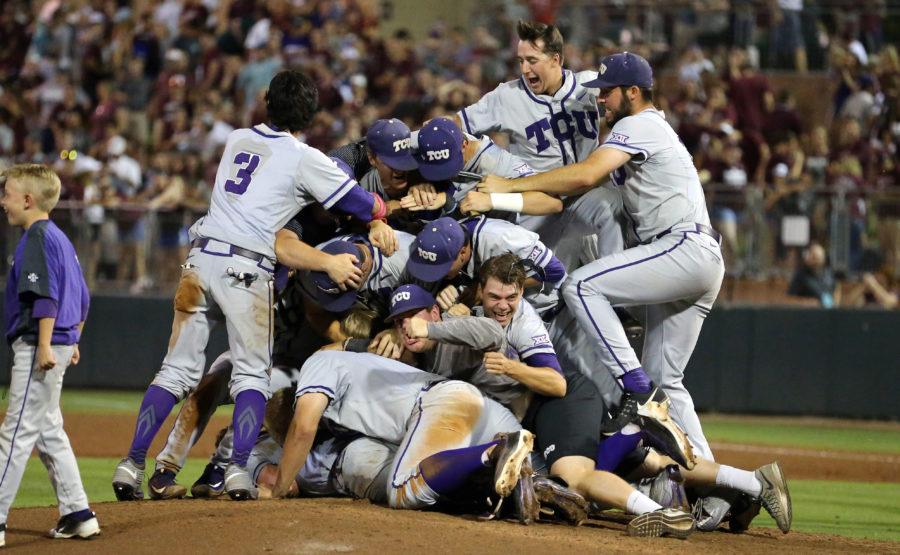 For the second Sunday in a row, the lanky righthander — it’s almost a law by now that you give his listed height of 6’9″ after mentioning his name — pitched a gem in a clinching game for TCU, this one sending the Frogs to the College World Series in Omaha.

Howard was every adjective a pitcher strives to be — commanding, dominant, electric, fill in the blank. He allowed no earned runs and just two hits, and struck out 8 Aggies over his seven innings of work.

And, still, it appeared he’d struggle to get credited with a win, or at least a decision, for much of the game.

TCU did all they could to strand runners on base. Four straight leadoff men reached first from the 2nd to the 6th inning, and the Frogs could only muster up one run along the way.

An error in the first inning meant that the Aggies held a slim 1-0 advantage early in the game. But, unlike yesterday, Howard was able to limit the damage to just that one run.

Then came the seventh inning, when everything broke the right way for the Frogs.

TCU scored three runs in the inning on just one hit. Three walks, an error, a wild pitch, and a sac fly allowed the Frogs to take a 4-1 lead that would prove to be the final score.

Every run in this game was unearned, for both teams.

It was that kind of night, with chaos, errors, and a strike zone that moved around the entire game, but Howard provided a source of consistency and energy for TCU, shutting down hitters and leaping across the right field line entering and exiting the field.

“The story of the night is Brian Howard,” A&M head coach Rob Childress said. “He made the pitch when it mattered most.”

Howard was asked if this game was the best he’d pitched in his life, and he didn’t hesitate to say yes.

“That was a lot of fun,” Howard said. “I felt like my stuff was working tonight.”

When he exited the game, freshman closer Durbin Feltman came in, and picked up right where Howard left off. Feltman didn’t allow a baserunner over his two innings, and struck out Michael Barash on a called strike three to win the series.

TCU head coach Jim Schlossnagle said in a game filled with so many errors and unearned runs, it’s a whole different kind of ballgame.

“It’s never about the best team, it’s about the team that plays the best,” Schlossnagle said. “I don’t want to discount my club, but there’s 13 guys drafted off of [A&M].”

“Some people say it’s luck, but I think you make your own luck. If Brian doesn’t pitch well, those extra ninety feet don’t matter.”

TCU’s 4-1 win takes them to the College World Series for the third season in a row. For a team that played only two seniors all season in what was supposed to be a rebuilding year, the Frogs have outpaced expectations.

They’ll seek to do that again in Omaha, beginning with a matchup against Big 12 rivals Texas Tech.