TCU looking to bounce back against Iowa State 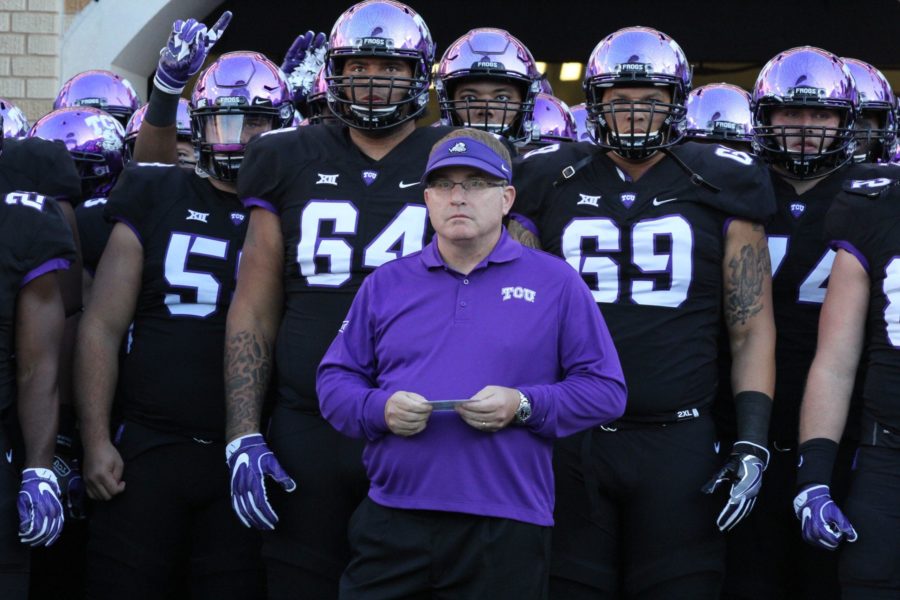 TCU head coach Gary Patterson and the rest of the team ready themselves for their game against Arkansas. Courtesy of Sam Bruton

The Iowa State Cyclones are heading into Fort Worth after two lackluster losses to Northwestern Iowa and the University of Iowa, but the Horned Frogs aren’t taking the game lightly.

“Iowa State almost beat us last year, so we have to prepare well for them,” said TCU linebacker Sammy Douglas.

In Ames last season, the Horned Frogs trailed ISU 21-14 after the first quarter, before pulling away in the second half to a 45-21 victory.

Douglas said this year’s squad has begun to coalesce.

“We were too dependent on our seniors and captains early on,” Douglas said. “But now we’re playing as one defensively and becoming more of a team defense.”

TCU head coach Gary Patterson said getting the defense in sync is crucial.

“Defensively, we need to get to where we’re hunting together and trust each other,” Patterson said.

Despite the Cyclones’ 0-2 record, they have a couple of a talented offensive playmakers in running back Mike Warren and 6’5, 223-pound wide receiver Allen Lazard.

“No.5 [Allen Lazard] has some good speed on him and he can catch the ball,” Douglas said. ”He’ll be a challenge one-on-one.”

Lazard is one of eight players in the country to have two 100-yard receiving games to start the season. He leads the Big 12 in receiving yards per game with 120.

“Lanning has been playing pretty good, and when he played us last year, they gave us a run for our money,” Douglas said.

“But, we’ll just go out there and compete with whoever is on the field,” Douglas said when talking about TCU’s game plan for the quarterbacks.

Patterson said there’s not much of a difference between the two quarterbacks.

“They seem to run the same offense with both of them, and when [QB Jacob] Park came in, the score was lopsided so it was hard to tell how they would’ve ran things early in the game,” Patterson said. “We have to prepare for all of it.”

He said he wants to get more production out of pass coverage.

“One of the things we need to get better at is pass defense, but one thing people don’t understand is that of the three corners who played last year besides Ranthony [Texada] aren’t here,” Patterson said. “The young guys need to get better, but we have a couple surprises for them but Iowa State will see that on Saturday.”

Even though TCU kicker Ryan Graf struggled last Saturday, Patterson said he needs to get his mind right on his own.

“Kickers are like pitchers, and really, there’s not anything good to say them,” Patterson said. “They have to have ice in their veins and then go about their business.”

If Graf continues to struggle, Patterson said that TCU’s other healthy kicker Brandon Hatfield may get an opportunity.

Patterson said starting linebacker Montrel Wilson is out this week.

“Sometimes to move forward you have to move back,” Patterson said. “People handle failure better than people handled success.”