TCU takes care of business in first half against Iowa State 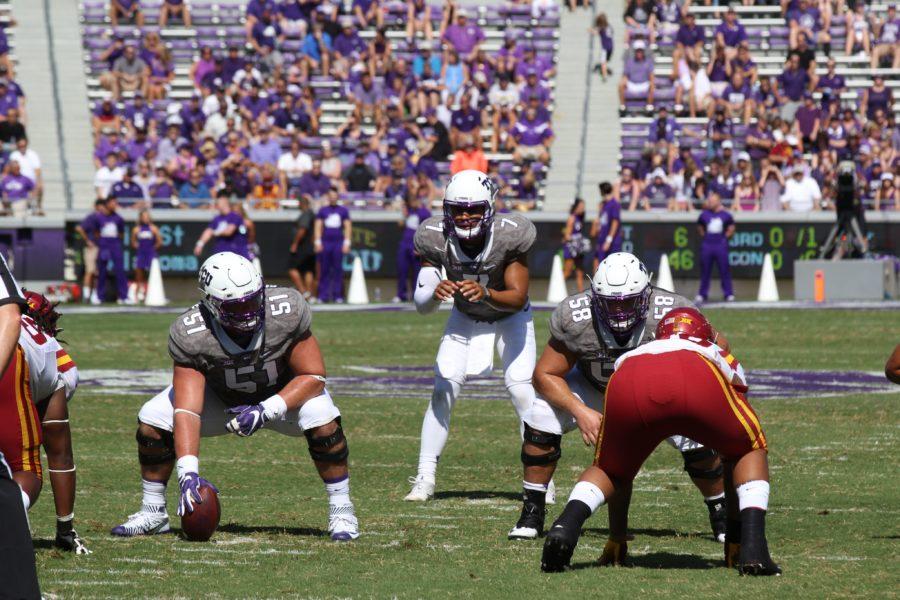 TCU opened its fifth season in the Big 12 conference against Iowa State Saturday morning, and jumped out to a sizable first half lead, 24-7.

TCU is 31-11 in regular-season games following a loss under Gary Patterson.

After a nine-play 41-yard drive to open the game, kicker Ryan Graf nailed a 37-yard field goal to give TCU the first lead of the game, 3-0.

The Horned Frogs notched the first touchdown of the game with five-and-a-half minutes left in the first quarter when running back Kyle Hicks followed his left tackle Joseph Noteboom into open real estate for an effortless 64-yard touchdown run.

The 64-yd scoring run by Hicks was the longest carry by a Horned Frog since Trevone Boykin had a 69-yard TD rush at K-State last season.

With just seven minutes left before halftime, TCU countered with a quarterback touchdown run of their own. Kenny Hill punched in a one-yard run for a score, pushing the Horned Frog lead back up to double digits, 17-7. The run was Hill’s sixth touchdown on the ground this season.

After just four plays, Kenny Hill connected with wide receiver Emmanuel Porter for a 40-yard gain and what appeared to be a touchdown with just a minute left in the first half. However, Porter was ruled down on the one-yard line, and running back Derrick Green scored a touchdown on the very next play to increase the Horned Frog lead to 17, 24-7.

Iowa State attempted to answer the TCU scoring drive, after Iowa State’s other quarterback Jacob Park threw a 32-yard strike to Ryen Trever. On the very next play, TCU defensive linemen Boesen and L.J. Collier combined to sack Park for a loss of seven. Defensive end Mat Boesen got his first action for TCU in Saturday’s contest, after dealing with a shoulder first two weeks of the season. The Cyclones ended the drive without any points.

Wide receiver Deanté Gray got the start at cornerback in place of Ranthony Texada for his second defensive start of his Horned Frog career.

The TCU defense was dominant in the first half, allowing just 158 of total offense, and only 92 passing yards.