Checking in with TCU’s “team mom” 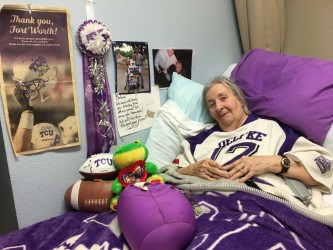 Draped in purple memorabilia, signed autographs and pictures galore with some of TCU’s finest, Room 111 is just one representation of the love one Fort Worth celebrity has for TCU.

Whether referred to as Dolores, or more famously as “Team Mom,” this 81-year-old TCU retiree has sparked the attention of many in the Horned Frog community.

But things are a bit different for this Frog fanatic.

Dolores Oelfke, who spent 23 years working in TCU’s Financial Aid Department, is 12 years retired and, as of six months ago, has situated into her new home at Mira Vista Nursing Home.

Unable to able to attend any more games, Oelfke has brought the games to her.

The once sterile walls have undergone a complete purple-themed renovation. Lined with finishing touches like a personalized jersey and picture of the TCU fanatic from the Star-Telegram, Oelfke has completely transformed her 9×12 space.

Despite visits from devoted family and friends, no amount of decor can replace the feeling of cheering on the games in person.

“She misses the games. She’d sit down behind the team with signs and ‘Team Mom’ and all of that,” said her husband Lyle.

Albeit bedridden, Oelfke and husband of 58 years, Lyle, do all they can in their free time to support the frogs. The famed “Team Mom” said she supports the frogs through both their good times and bad, though this isn’t to say she doesn’t get frustrated.

Asked her opinion of the Frogs’ game against Arkansas, Oelfke, prefaced with an eye-roll, had little to say.

While Oelfke attributes her positive memories from the Fort Worth university to the kids, staff and parents, she and Lyle collectively agreed that there was one group in particular that stood out.

During her career at the Office of Financial Aid, Oelfke managed a work-study program where she was introduced to many of the athletes. Their lifelong relationship took off from there.

“I would always be there when the team came on the bus, and I’d be there to greet them,” Oelfke said. “And then when they’d leave, I’d be there to say bye. The team invited me to a lot of their things.”

“We got the idea from a campaign on TV,” Lyle said. “I fixed her a sign one game and it took off from there.”

Taking pride in attending almost every sporting function that TCU had to offer, Oelfke, who was once labeled “TCU’s No. 1 fan” by Chancellor Victor Boschini, is no stranger to the spotlight when it comes to the passion she has for TCU and its athletics.

“She’s been on the front page of Star-Telegram at the bowl game,” Lyle said. “She used to be in the parades all the time with the convertible and signs.”

When asked about her favorite part of TCU sports, she responded, “I can’t answer that. There’s too many.”

Oelfke is located at the Mira Vista Nursing Home in Room 111 and loves visitors.