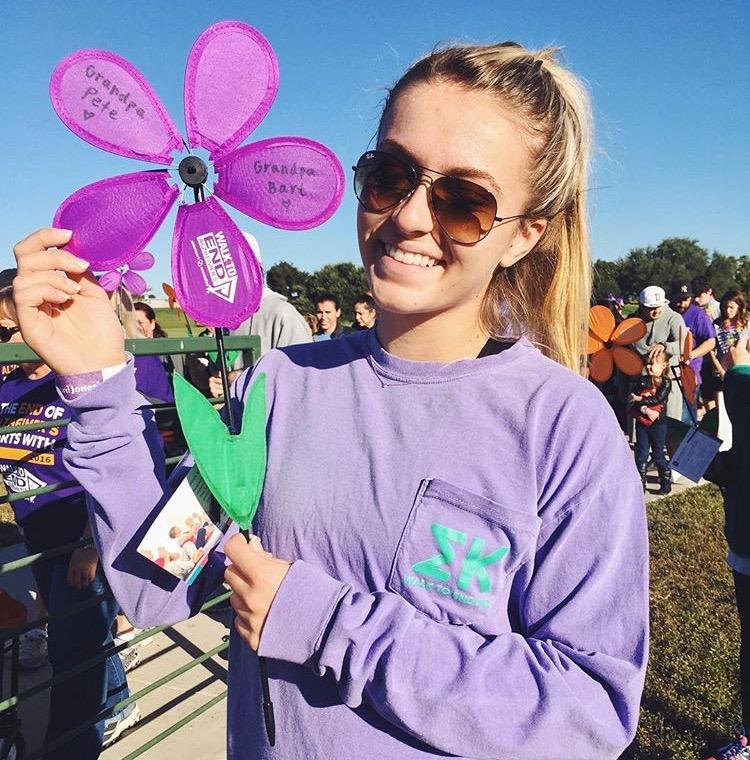 Freshman Tess Clausen holds a purple flower in memory of her Grandpa Pete who she and her family lost to Alzheimer's (Photo courtesy: Alzheimer's Association North Central Texas Chapter).

TCU’s Sigma Kappa was this year’s top fundraiser in the annual Walk to End Alzheimer’s.

The Kappa Eta chapter of Sigma Kappa raised $33,594.54 on Oct. 22 for the Alzheimer’s Association’s North Central Texas chapter during the 2016 walk.

“It was a pretty significant lead, which we were grateful for everything,” said Elizabeth Sehon-Harris, Alzheimer’s Association public affairs coordinator. “But [Sigma Kappa] really came in large.”

The Kappa Eta chapter was also the fourth biggest fundraising chapter in the national sorority, whose national philanthropic efforts have been focused on the Alzheimer’s Association since 1984.

This year, there were 3,000 participants in the annual fundraising walk, including 200 sisters from Sigma Kappa, both participating and volunteering.

“They helped volunteer,” Sehon-Harris said. “So not only did they raise an incredible amount of money, but they actually came out with boots on the ground.”

Volunteers were asked to write and sign 600 advocacy cards to local government officials to help raise awareness and to have the Alzheimer’s Association voice heard by Congress.

“They were just a vital part of the Walk to End Alzheimer’s, and we hope to continue that relationship each year with [Sigma Kappa],” Sehon-Harris said.

Sigma Kappa’s fundraising efforts started in the spring with their second annual Sigma Kappa Carnival, where every fraternity and sorority participated in games and donations toward the Alzheimer’s Association.

Sigma Kappa’s vice president of philanthropic service, Clare Wilson, said that the sorority was really excited about the news and their fundraising efforts.

“I know it made all of us very excited at chapter meetings to hear about it, and seeing at the walk all of us being recognized as a top fundraiser there that day,” Wilson said.

Wilson said many of the women in the chapter have family members who have Alzheimer’s, which drove her to become the chapter’s philanthropy chair.

“I think having some of my closest friends have family members who are affected by it that I have met definitely drives me to be a leader for the cause,” Wilson said, “and motivate the women to fundraise and understand the meaning and importance of our philanthropy.”

According to the Alzheimer’s Association, 350,000 Texans that are 65 and older have the disease. It’s estimated that there will be 500,000 Texans with Alzheimer’s by 2025 because of the large population of baby boomers.

Sehon-Harris had a grandmother who passed away from the disease. She said she was close to her grandmother, who inspired her to study journalism in college.

“She was incredibly intelligent, bright, witty, clever and she basically stopped forgetting, and it really changed who she was completely,” Sehon-Harris said. “And then toward the end, she didn’t really know who I was. It was pretty devastating; it’s hard to see someone who you love to go through that.”

Christina DeMarois, Alzheimer’s Association intern and Sigma Kappa member, also had a close relative who passed from the disease: her uncle’s mother.

“I don’t remember a lot of it,” DeMarois said. “I just remember her starting to forget who we were, who all my cousins were and everything, so that was kind of hard to understand, especially when you’re young.”

DeMarois said new research suggesting that Alzheimer’s could be genetic motivated her to get involved.

“Knowing that they are finding that it could be genetic, thinking to my cousins or my uncle and how it could affect them with something, that really sparked me to want to get involved,” DeMarois said.

The Alzheimer’s Association’s goal was to raise $355,000 this year, but they’re not there yet as December draws near.

“Our goal was $355,000, and so far, we’ve only reached about $280,000,” Sehon-Harris said. “So we’re really still in need of more funding toward the walk, which is really crucial. We’re pretty much asking everyone, everywhere if they can please donate toward the walk.”

There is still time to act. People have until Dec. 31 to go to act.alz.org/fortworth to donate and help the Alzheimer’s Association achieve its goal.

Both Sehon-Harris and Wilson said they hope to continue their organizations’ relationship to help further the awareness and support for Alzheimer’s research and treatment.

“Every year, Sigma Kappa has surpassed the last year’s goal,” Wilson said. “So, I hope that next year we possibly could get above $35,000, and maybe in the future we could get above $40,000, and gradually work our way up to really committing ourselves to the Alzheimer’s Association.”