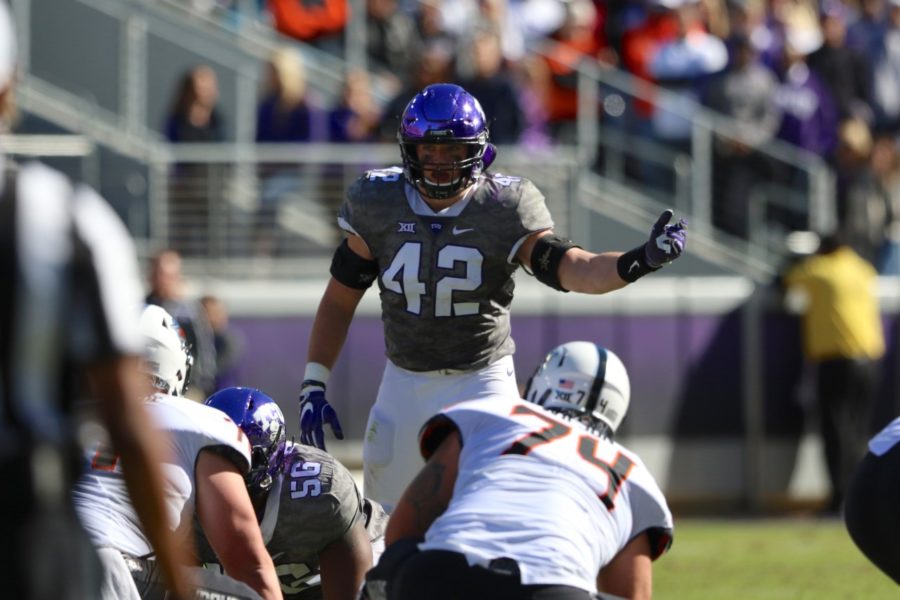 Here are five things to know about the first half between the Horned Frogs and Cowboys.

A game after TCU running back Kyle Hicks rushed for a career-high 192 yards and five touchdowns, the Cowboys have made it clear that they would rather any other Horned Frog do the heavy lifting for the TCU offense. Hicks had 12 carries for 17 yards. It appears that Kenny Hill with have to find a way to put up points with his arm for TCU to come away with the upset victory.

OSU quarterback Mason Rudolph had the fifth-most passing yards in the nation with 3384 passing yards to go along with 24 touchdown passes heading into Saturday’s game, but against TCU Rudolph has just 84 passing yards. One reason for TCU’s successful pass defense is that they’ve been able to generate pressure. TCU has sacked Rudolph twice and forced a number of hurried throws. If TCU can sustain this level of play defensively, it will be in prime position to shock the No.11 Cowboys.

3. KaVontae Turpin has a rollercoaster performance

KaVontae Turpin had a very inconsistent first half Saturday. As a wide receiver, he caught the game’s first touchdown on a shovel pass from Kenny Hill. As a punt returner, it was a whole lot of ugly. On his first punt return, Turpin fielded a punt at the nine that could’ve gone into the end zone for a touchback, but instead he reversed field and was tackled at the four yard line. His second punt return was even worse. He fumbled that punt return, but he did recover it. Turpin Time hasn’t struck yet on special teams, but it very well could in the second half.

4. The Cowboys ground game picks up the slack

5. TCU outsmarts itself on fourth and goal

On TCU’s last offensive play of the first half, it had fourth and goal from the one yard line. Instead of running out a traditional offense, TCU opted for a wildcat attack with running back Kyle Hicks taking the snap and Kenny Hill on the sidelines. Hicks faked a handoff and threw an incomplete pass to tight end Cole Hunt that ended the Horned Frogs’ drive without any points scored. TCU head coach Gary Patterson’s decision to go with that play may come back to haunt the Frogs later in the game.

TCU will receive the second half kickoff.