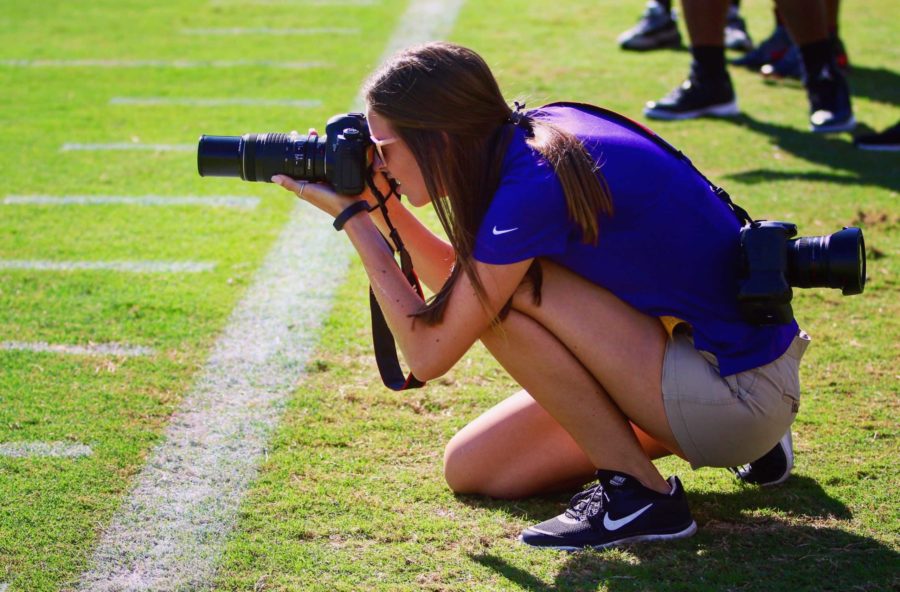 Junior film, television and digital media major Houston McCullough interns with TCU Football as a social media intern. She said her internship is preparing her for a future career. | Photo courtesy of TCU Football.

While having an unpaid internship can be an economic hardship for college students, some TCU students have found value without the pay.

“There were moments where I was doing work that served the good of the community, so it kind of felt like volunteering, and there’s not really a monetary benefit to volunteering,” Scott said. “I know other internships people have had where they go in and check boxes, and they don’t really add value to where they are.

“It wasn’t paid, but there was a lot of value that came out of it — much more valuable than any dollar amount I could have gotten from any internship,” he added.

McCullough said her internship correlates with what she wants to do for a future career.

“I want to do social media promotions for major athletic teams or major corporations, so I figured this was a good way to get my foot in the door and also get experience,” McCullough said. “Every video or photo I take, I still own the rights to them, so I can use them in my portfolio or to promote myself to future employers.”

“The internship, even though it includes actual operation of the facilities of the employer, is similar to training which would be given in an educational environment;

The internship experience is for the benefit of the intern;

The intern does not displace regular employees, but works under close supervision of existing staff;

The employer that provides the training derives no immediate advantage from the activities of the intern and on occasion its operations may actually be impeded;

The employer and the intern understand that the intern is not entitled to wages for the time spend in the internship.”

TCU’s Center for Career and Professional Development executive director John Thompson said there is still some question regarding the guideline stating “the internship experience is for the benefit of the intern.”

“You’ve got this nice, broad guideline and so it’s a judgment call. Let’s say you go to work for NBC and what they have you do is say, ‘File these papers’ or ‘Go take a look at computer files’ or ‘Go get me my coffee,’ that’s not exactly benefitting you,” Thompson said. “On the other hand, if they say, ‘Hey, we’re going to a crime scene,’ or ‘There’s a fire we want you to go report on,’ that’s benefit to you. So it gets into is this really a student benefit or does this really benefit the company?”

Thompson also said that since the guidelines were created, some companies stopped taking interns.

“The companies have to be pretty up-front about what the student is doing because they open themselves up for a lot of criticism or a lawsuit if they do hire students but don’t use them for stuff that’s going to benefit the student, whatever that might be,” he said.

Junior political science and communication studies double major Maddie Madill said worked as an unpaid intern on a local political campaign. She said she doesn’t feel that she benefitted more than the organization did.

“I felt like I was doing the dirty work while the executives just kind of sat and watched,” Madill said. “I’m sure the work was meaningful for the campaign. I know it’s important to make those relationships with people when you’re talking to someone about a candidate, but it just didn’t feel meaningful at the time.”

So does the company benefit more than the intern does from the internship?

Joseph Jammer, the Fort Worth Public Library’s public education specialist and teen specialist, said he believes both the library and the intern benefit equally from the internship program.

He said the library pays interns because it wants to be competitive. “If someone had an opportunity to work somewhere with pay as opposed to doing it just because they like it, then we hope that that person would also see us as a way of saying, ‘OK, well there are two things going on, I actually like library work and I’m getting paid,’ so that makes the experience heavily pleasurable for them,” he said.

Thompson said even with the federal guideline the company is still going to benefit in some way because of the interns. He said the greatest benefit is getting the chance to evaluate talent for possible future full-time employees.

“Eighty-five percent of students nationally who have internships have gotten jobs, and it’s almost 50 percent who have internships went to work for the company that they did the internship with,” he said. “So if you improve your chances for getting a full-time job, the company’s got the real great opportunity to evaluate you; they get to see talent that they can hire and not lose money on a gamble.”

But unpaid internships could be a setback for students who need both experience for a future career and money to support themselves.

According to a study conducted in 2014 by the National Association of Colleges and Employers (NACE), 46.5 percent of internships were unpaid — almost half of all internships offered.

Madill said she drove to Dallas for the internship five to six days a week with no gas stipend.

“I pay for my own things, my parents give me my rent money and that’s it, so it was really hard to have an unpaid internship when you’re expected to travel so much when you’re not getting a stipend, so it put me through an economic hardship when I was going through that internship,” Madill said.

“That nanny position is my only source of income right now, and I don’t have time to pick up more hours because of classes and the internship,” Tall said. “I just make sure when I get my paycheck that I put aside a little bit for each of my bills to make sure I’m not spending on eating out on money that needs to be used for bills later in the month.”

A few years ago, TCU set up an Internship Scholarship Program to offer monetary aid to students who are in need of it during working an unpaid internship.

Thompson said one of the reasons the program was created was because TCU knows there are students who want to do internships, but they have costs. If they don’t get paid, they’re out of pocket for gas or food to do the internship.

The amount of money provided for a student who is awarded the scholarship varies as well, depending on the number of hours they’re interning, the quality of his or her application, what he or she will be doing with the money and how the money is necessary for them to do the internship.

The issue of unpaid internships at TCU mirrors the what’s happening on a nation-wide scale.

Carlos Vera founded the Pay Our Interns campaign,after struggling financially while interning at the White House.

NPR reported that Vera said that at his university, American University, the per-credit cost for a course to receive credit for the internship is $1,467.

“You’re paying to intern for free,” he said, according to the article.

The goal of Pay Our Interns is to advocate for more paid internships for millennials, based on the notion that all individuals, regardless of socioeconomic status, shouldn’t be barred from pursuing real-world experience.

“You need to network well and do well in your classes here at TCU and work hard at the job that you can work at, and I think you’ll do just fine,” Ferguson said. “Go to all the events that the Career Center hosts, go get advice on your resume.”

Ferguson also said it’s not the end of the world if a student cannot take an unpaid internship.

“I certainly recommend they do an internship if they can afford it from a money or time perspective, but it’s not required — there are students who end up with great jobs after graduation who didn’t get a chance to intern,” he said.

Thompson said that over recent years, the quality of internships has improved.

“In the past, some of the internships used to be the ‘gofer’ kind, meaning the company would hire you, but you’d end up doing administrative tasks and nothing related to your major,” Thompson said. “Now, the internships are becoming more focused and closer to what the student’s major is, so they really get the benefit of applying what they learn in the classroom.”

He also said more internships are being offered now more than ever and that more are paid. Also, employers are recommending individuals have internship experience when applying to a position after they graduate.

“I told an employer one time he really needed to recruit TCU students and he asked why, and I said, ‘Well, we have some really great students who are really bright and they know how to communicate,’ and he said, ‘Thompson, I can go to SMU, UTA, Baylor, UNT, and get students who are smart and can communicate — what I really want are students who know how to work, who have worked and have experience so when they come to work for me, I’m not having to teach them every little thing,’ and that was kind of a wake-up call.”