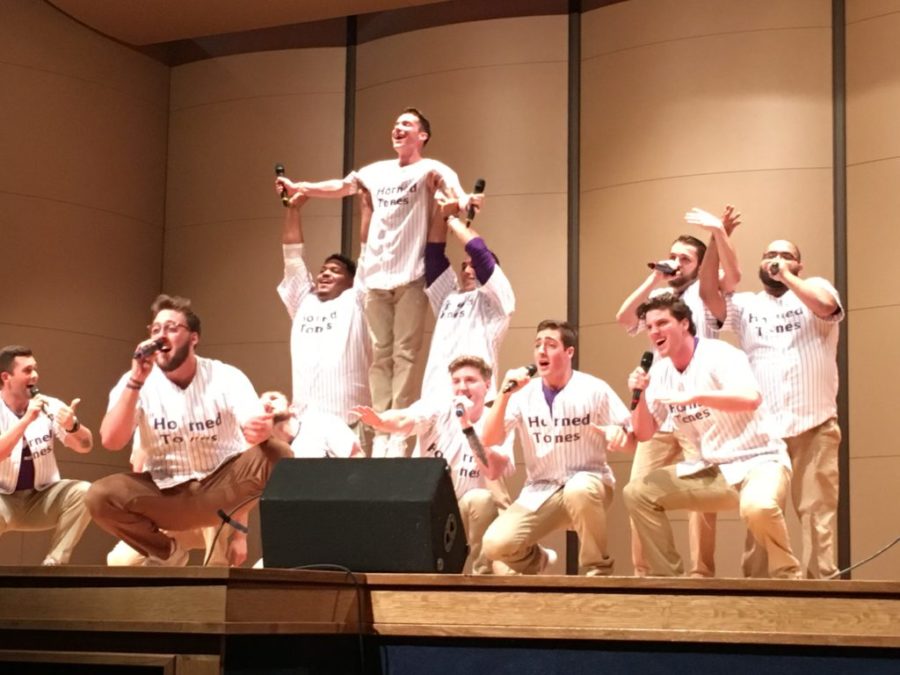 Jackson Grosskopf is lifted into the air during a performance by The Horned Tones at the ICCA Quarterfinal Competition Saturday, February 18, 2017.

TCU a cappella groups The Horned Tones and License to Trill won the top two spots Saturday night in the International Championship of Collegiate A Cappella Southwest Quarterfinal competition, earning a place the semifinal competition.

It was the first time any TCU group advanced to semifinals.

“It is so surreal what just happened,” License to Trill member Kameron Reyes said. “It’s the first time any TCU group is moving on to semifinals, and now we have two.”

The Horned Tones earned first place with a mashup of “The Sky’s the Limit” by Jason Derulo and “Forever” by Chris Brown, “Hold On” by Michael Bublé and “Brother” by NEEDTOBREATHE.

License to Trill performed “Nothing Left to Say” by Imagine Dragons, “Don’t Let Me Down” by The Chainsmokers and “Ride or Die” by Brayton Bowman.

Semifinals is March 11 at UCLA.

Hartley said the Horned Toads will get ready to compete by working on the “nitty gritty details.”

“We’re going to focus on the angles of everything and come out even better than we were this time,” Hartley said.

Sabrina Harb founded License to Trill after her father’s death. The group partnered with the LUNGevity Foundation February 1 to host a 5k and free concert to raise money for lung cancer research in honor of Harb’s father. When asked what she thinks he’d be saying about their win, she said, “I think he’d be super proud. I hope.”