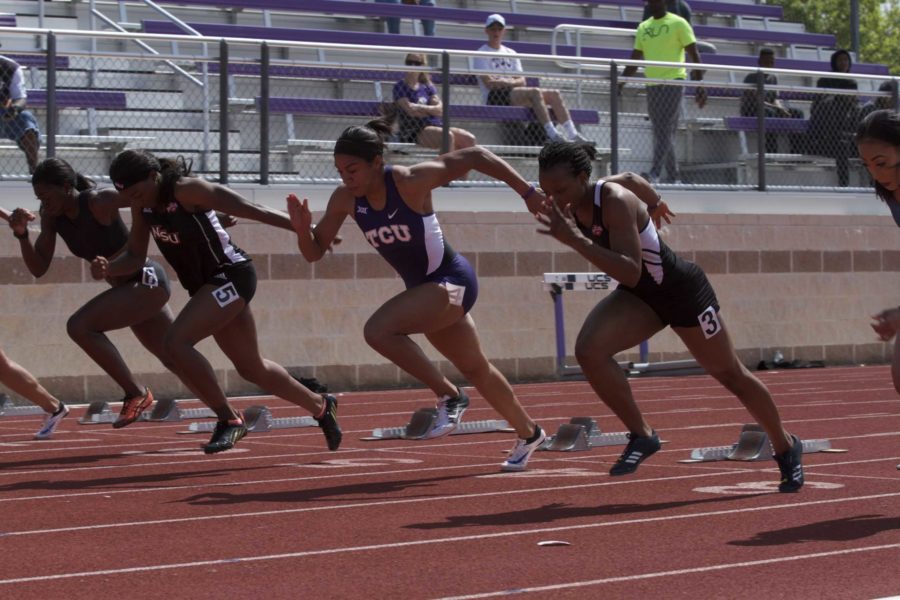 Brittney Trought racing to the finish of the 100 meter hurdles.

TCU Track and Field opened their outdoor season at the Lowdon Track and Field Complex on a high note. Six athletes recorded personal bests and the Horned Frogs collected 14 event wins as a team this weekend.

“We had an outstanding first meet,” said director of track and field Darryl Anderson. “I think it was the best first meet we’ve had in a long time.”

To kick off the weekend, the Frogs recorded three first-place finishes out of the four events held.

Senior Paola Miranda grabbed first in the women’s hammer throw with a mark of 189 feet, 2 inches (57.65 meters) on her second attempt.

Sophomore Justin Sanchez grabbed second in the hammer throw with a mark of 181 feet, 6 inches (55.32 meters).

“All in all, it was a good day with great weather” Anderson said.

The women’s 4×100-meter relay team of seniors Judy Emeodi and Sabrina Moore, and sophomores Briona Oliver and Kayla Heard placed second with a time of 44.78.

Heard recorded a personal best with a first-place finish in the 400 meters at 53.23, moving her into TCU’s top 10 all-time list. Senior Tiffany Terry and sophomore Jaden Davis notched third and fifth finishes with times of 54.67 and 55.81.

Sophomore Brittney Trought recorded a first-place finish in the 100-meter hurdles with a time of 13.31, the third fastest time in school history. Senior Makaila Flannigan and sophomore Lexi Aitken grabbed fifth and sixth with times of 13.99 and 14.06.

Aitken also produced a personal best in the 400 hurdles, placing first with a 59.60.

The men’s team of seniors Raymond Bozmans and Jalen Miller, junior Emeilo Ferguson and sophomore Darrion Flowers notched a first-place finish with a time of 39.89, setting the tone for the meet.

“All in all, it was a good day with great weather” Anderson said.

“I think we will get better,” he added. “We will get a week of training; we have 10 days before we race again at Texas Relays. We will put some work in, and the weather is supposed to stay nice. I’m looking forward to it, the sky is the limit.”

The Horned Frogs are set to compete at the Texas Relays from March 29- April 1.