TCU sprints past UCF to advance to NIT Championship Game 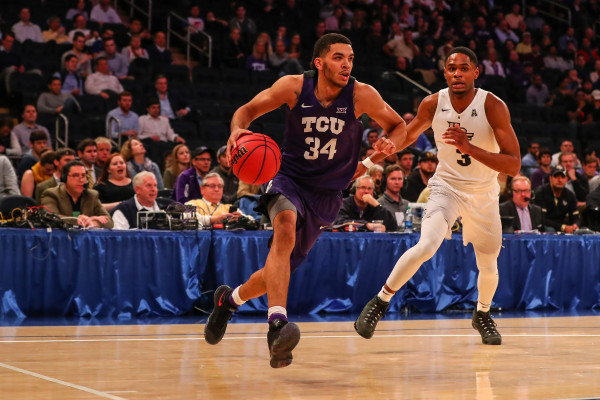 TCU guard Kenrich Williams drives to the hoop against UCF in a 68-53 win Tuesday night at Madison Square Garden. (Photo Courtesy of GoFrogs.com)

In the ‘World’s Most Famous Arena’,  TCU took down the University of Central Florida to earn a ticket to the NIT championship game for the first time in program history.

The Frogs blazed past the Knights in the second half of the Tuesday’s semifinal at Madison Square Garden in New York City , 68-53.

UCF senior guard Matt Williams, one of the top 3-point shooters in the country, came into the contest shooting 38.8 percent from beyond the arc. He stayed true to form, dropping three three-pointers in the first half.

Despite the Knights’s advantage from distance, the Frogs held their ground down low.  TCU out-rebounded and out-scored UCF by 20-18 and 16-10 respectively.

At 7-foot-6 inches, UCF starting center American Athletic Conference Defensive Player of the Year Tacko Fall is one of the tallest humans on the planet, and he made his presence known in the first half, blocking three shots.

“It was a challenge to play against the tallest basketball player in the NCAA right now, you cannot really get ready for that,” TCU forward Vladimir Brodziansky said. ” We just got used to him being there all the time and trying to block the shots, so we went harder to finish the shots.”

After halftime, TCU roared back in front, sprinting ahead 44-29 on a 16-3 run just 4:15 into the second half.  During that run, Fall picked up his third foul with 15:44 left in the game, which prompted UCF to pull him from play to keep him from fouling out.

“We emphasized more driving, penetrating, making decisions, and finding the open guy,” Dixon said. “I thought once we started to hit some some guys, getting some layups on dump-offs, Fall had to stay closer to his guy.”

After dominating from beyond the arc in the first half, the Knights hit just one of their fifteen three-point attempts in the second half.

“They just made some shots that we thought we guarded well, and we didn’t think they could sustain it,” Dixon said. “We stayed with our sel[ves] defensively against their tough shots they had early and didn’t panic.”

TCU forward Kenrich Williams notched double-double number 18 of season with 12 points, 12 rebounds with 7:28 to play. Williams, coming off a triple-double performance against Richmond in the NIT quarterfinal, finished with 14 points,14 rebounds, and seven assists, just three shy of a consecutive triple-double.

“I’ve been more aggressive in finding my teammates, and it has something to do with our point guard missing, me stepping up and Jaylen missing,” TCU guard Kenrich Williams said.

Williams’, stellar performance was sparked at halftime by one of TCU’s assistant coaches.

“Going into halftime, one of the assistants just told me I ned to pick my play up,” Williams said. “I did a little more hustling in the second half and was thankful that the ball touched my hand.”

“I thought Kenrich was terrific in the second half,” Dixon said. “He just took over: passing, finishing, offensive rebounding, and that’s pretty big.”

Brodziansky put the exclamation point on the Horned Frog victory with an and-1 layup on Fall with 2:40 left to put TCU up 12, 62-50. TCU backup point guard Michael Williams added a three-pointer from the left corner with 1:54 remaining to put TCU up 65-50.

Brodziansky also ended Fall’s night on a layup attempt under the rim that coerced Fall into committing his fifth and final foul. Fall finished with with seven points, five rebounds, five assists, and six blocks.

“The main thing was getting him father out from the basket and not letting him be by the rim to get second shots,” Dixon said.

Tech is powered by a stingy defense led by junior center Ben Lammers, the ACC Defensive Player of the Year. He averages 14.6 points-per-game and 9.2 rebounds-per-game, while blocking the second-most shots in the nation and most in the ACC with 103 blocked shots.

Tipoff between TCU and Georgia Tech at Madison Square Garden Thursday night is set for 7 p.m.

“We love coaching these guys all year long, and we just want two more days with them, so they gave us that,” Dixon said. “We’ll look forward to getting ready for Georgia Tech.”