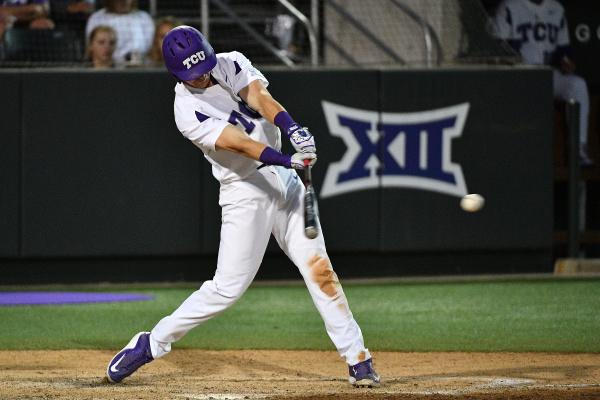 The No. 3 ranked Horned Frogs (22-5, 8-1) pushed their win streak out to eight games with a sweep of Kansas State (15-13, 0-6) in Manhattan, Kansas, winning two games in extra innings on Friday and Saturday, and blowing out the Wildcats on Sunday.

For the second time in three starts, Horned Frog ace Jared Janczak took a perfect game deep into his outing. After retiring the first 22 batters he faced on March 18 against Kansas, Janczak set down the first 18 Wildcats on Friday.

Despite the dominating performance that saw him toss nine innings of shutout ball with seven strikeouts, while only giving up two hits and a walk, Janczak did not factor into the games’ decision because TCU’s bats went cold as they too, failed to score in regulation.

The Frogs put multiple base runners on in the first, seventh and eighth innings but could not score a timely hit, sending the game into extras at a 0-0 tie.

TCU head coach Jim Schlossnagle called on Sean Wymer to pitch the bottom of the tenth after the Frogs went scoreless in the top of the inning, and he sat down the Wildcats in order on nine pitches.

TCU’s offense finally broke through at the plate in the 11th on an RBI single by Luken Baker. Baker’s hit was the first of four in a row, as Josh Watson drove in a run next making it 2-0, before an infield single by Nolan Brown loaded the bases. Elliott Barzilli blew the game wide open with a bases clearing double putting the Frogs ahead 5-0.

Wymer pitched another 1-2-3 frame in the 11th, securing his second win of the season.

The pitching staff continued to dominate on Saturday, as Nick Lodolo delivered his best outing as a Horned Frog, keeping the Wildcats scoreless over seven innings. The freshman surrendered just two hits and walked none. Saturday’s outing marks back-to-back solid outings for Lodolo, who had struggled at times to begin his career at TCU. Last week against Oklahoma State, he showed signs of breaking out after shutting out Oklahoma state for the first five innings, before letting the start get away from him in the sixth.

The Frogs struggled at the plate again in game two, failing to score in the first nine innings for the second straight day.

KSU starting pitcher Parker Rigler gave the Horned Frogs plenty of chances though, as he walked seven and gave up three hits in his five innings of work. TCU went just 1-18 in the first nine innings with runners on base, leaving 11 runners on the base paths.

Trey Morris and Haylen Green (2-0) kept the game tied at zero with scoreless innings in the eighth and ninth. In the 10th, Baker hit a game-winning single for the second straight night, driving in Cam Warner for the lone run of the game.

Durbin Feltman set down the Wildcats in order in the 10th, moving to 7-7 on saves this season and 16-16 on his career at TCU.

Sunday’s game had a different feel for the Horned Frogs, as they exploded for six runs in the third inning, running away from the Wildcats. Austen Wade singled home a run to start the scoring, before Baker had a two run single, Watson doubled in a run, Brown hit a sac fly and Ryan Merrill delivered an RBI single.

Brian Howard got the start for the Frogs and picked up his fourth win of the season. He extended the pitching staff’s shutout innings streak to 30.2 before giving up a two run homer with one out in the bottom of the fourth. He ended up pitching six quality innings, allowing only the two runs while striking out five.

TCU put up a second crooked number of the day in the fifth, scoring five and extending its lead to 11-2. The runs came home on a Merrill RBI double and a Warner grand slam. The grand slam was Warner’s third homer of the year, and the Frogs second grand slam of the week. Mason Hesse hit a grand slam in TCU’s 18-2 win over UT Rio Grande Valley on Wednesday.

Both teams tacked on runs in the seventh as the Frogs scored one on an Evan Skoug sacrifice fly and KSU got a two run single from Jake Scudder to make the game 12-4.

TCU will put its eight game win streak on the line on Tuesday night at UT Arlington at 6:30 p.m. TCU knocked off the Mavericks in Arlington 7-2 on February 21.