Takes two to tango: TCU wide receivers need to step up for Kenny Hill to succeed 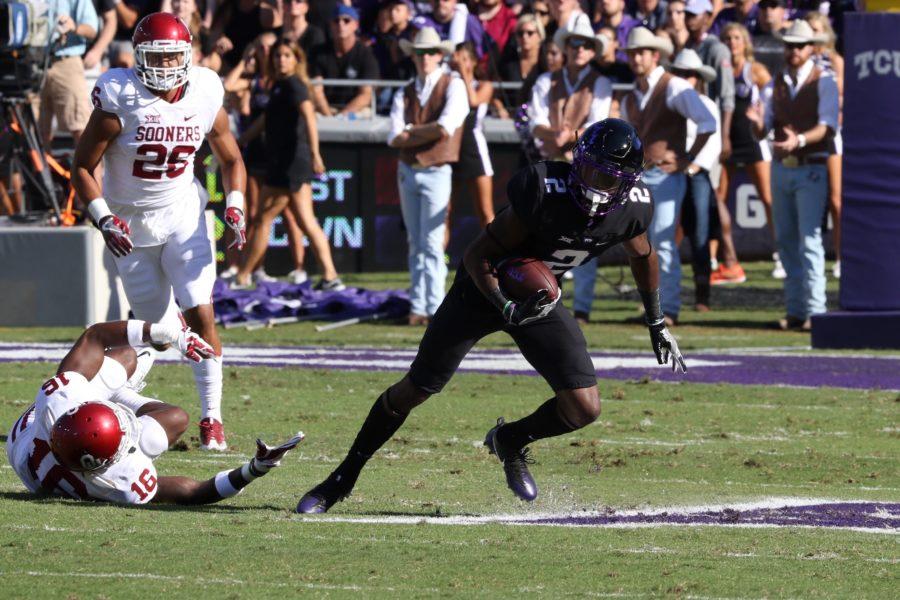 TCU wide receiver Taj Williams looks for an opening to run down field against Oklahoma. (Photo By Sam Bruton/TCU photographer).

Heading into the 2017-2018 season, TCU football faces an old question: who’s going to catch the ball?

Head Coach Gary Patterson has said there a few candidates on the roster with potential, including returning receivers and incoming freshman. But after last season, returning players have a lot to prove.

“I think Emanuel Porter has had a good camp, Jaelan Austin has as well, and we have three freshmen coming in who have a chance to be those guys,” Patterson said. ” Taj Williams has the potential to be better at the position, and Shaun Nixon can play some wide out for us like before he got hurt.”

Porter had just 15 catches last year. Williams started his TCU career with a bang, catching 11 passes against South Dakota State in the season opener, but he only recorded 28 catches in his last 12 games. He didn’t catch a single pass in the 31-23 loss to Georgia in the Liberty Bowl.

Nixon is coming off an injury, and next season’s seniors Ty Slanina, John Diarse, and Desmond White combined to haul in just four touchdowns between the three of them.

Austin, who tied for the team lead with five touchdown catches, could take a step forward, and the three freshmen who Patterson referenced, Jalen Reagor, Omar Manning, and Kennedy Snell, could contribute immediately. Hyperlink recruiting article

“I like to compete and I’m a playmaker,” TCU freshman wide receiver Jalen Reagor said, stumping for the possibility to see field in his first year as a Horned Frog. “If you can play, you should put the best eleven on the field.”

Whoever the best wide receivers on the team end up being come September, Hill will need to gel quickly with his teammates in order to achieve maximum results.

To this point, Patterson said receivers are catching what has come their way.

“Seems to be OK,” Patterson said. “If not, we won’t win very many ballgames. Because that’s what we do in our offense.”

With TCU running an Air-Raid, no-huddle, uptempo attack predicated on rhythm passing, the chemistry between Hill and the wide receivers is of the utmost importance.

“The faster he gets in the flow of a game, the better a player he is,” Patterson said. “Point is, what do we have to do to get that done? Some quarterbacks, it’s throwing the quick throws.”